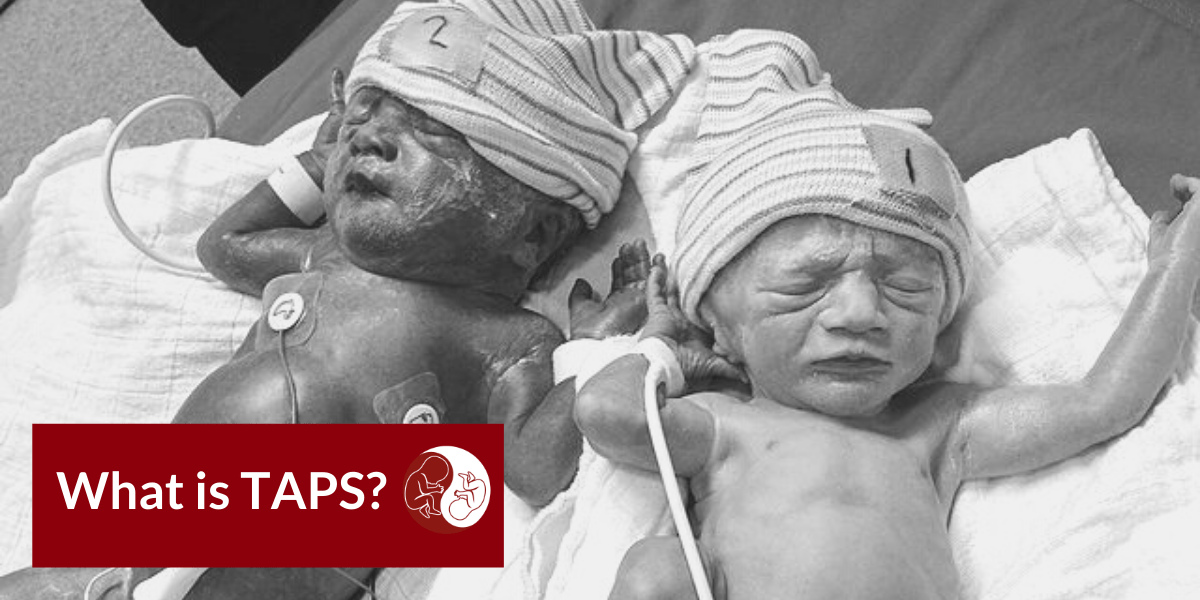 What is TAPS in Twins? Twin Anemia Polycythemia Sequence, or TAPS as it’s better known, is a rare disease affecting twins sharing a placenta. TAPS in twins has many complications, including a high chance of neurodevelopmental impairment in donor twins, as well as deafness. There is also the potential for death and injury to babies from TAPS that is not diagnosed before birth.

What Causes TAPS In Twins?

It is caused by tiny surface connections in the placenta, less than 1mm thick. Red blood cells pass from the donor twin to the recipient twin at a rate of around 5-10 milliliters per day (that’s less than half an ounce). The transfer happens slowly, and over time, it causes the donor twin to become chronically anemic, and the recipient twin to become polycythemic. For more information on how it is diagnosed, visit here.

Unlike TTTS, what’s unique about TAPS is that it does not present with fluid imbalances or other physical symptoms. There are some recorded symptoms that can be related to TAPS, like a bright placenta on the donor twin’s side (called an echogenic placenta), an enlarged heart (cardiomegaly) also for donors, and a starry sky liver in the recipient (a liver that has bright, white spots on it in ultrasound images), but these are not required additional symptoms and often TAPS will be the only issue.

Signs and Markers Are Not Always There

However, these are markers and they should be looked for alongside routine MCA dopplers. (14% of TAPS cases will present with nothing more than discordant MCA dopplers. )

As the disease progresses, things can become worse for the donor, where the chronic anemia can lead to hydrops (large amounts of fluids building up in the baby’s tissues which causes swelling), and for the recipient, things like blood clots and heart issues from pumping around the thicker blood are a real risk.

It used to be thought that it was common for the donor and recipient to “switch places”, ie the TTTS donor would become the TAPS recipient, and vice versa, but research from the International TAPS Registry showed that the difference was marginal, with only 55% of cases switching roles. It really highlights that the residual anastomoses are the problem.

There are several treatment options for TAPS, including (repeat) laser surgery, expectant management, early delivery, in-utero transfusions, and selective reduction. We don’t know the best treatment for TAPS yet, but this is one of the goals of the international TAPS Trial.