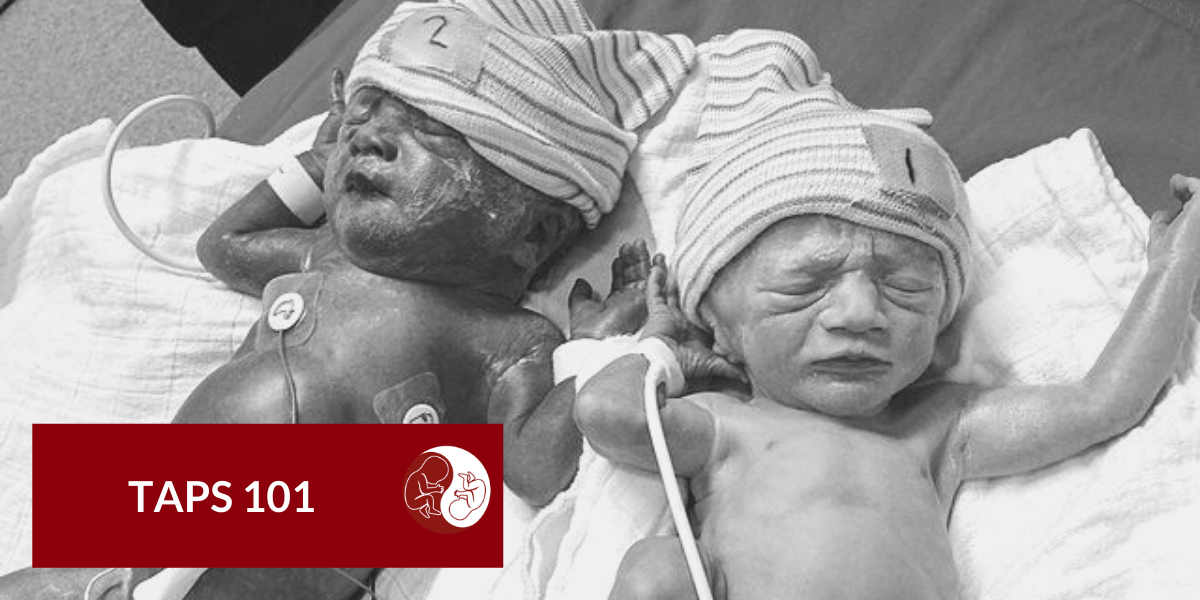 In the first of our webinar series, we looked at the fundamental question: “What is TAPS in twin pregnancy?” To us, it was important to break down the basics of Twin Anemia Polycythemia Sequence, talk about how TAPS is diagnosed, some basics on TAPS treatments, and also break up some myths that commonly are associated with TAPS.

We also were privileged to hear the story of Bethany Beck, and her girls Arielle and Ayla, and how she not only advocated for regular TAPS screening, but also her diagnosis, and premature delivery at 29 weeks.

What is TAPS in Twin Pregnancy?

Twin Anemia Polycythemia Sequence is a rare disease affecting monochorionic twins. Named and described just 15 years ago, this disease is often misunderstood and misdiagnosed. The aim of this webinar was to talk about TAPS with leaders in research and help patients understand more about this disease, and let them ask experts about the facts. The first question, “What is TAPS in twin pregnancy?” is often met with a lot of misinformation, and confusion.

So, to answer this question, we turned to Dr. Femke Slaghekke, Maternal-Fetal Medicine specialist. Her work with TAPS staging systems and involvement in developing the Solomon Laser Technique for treating TTTS and TAPS comes from her years of experience in fetal therapy and sonography. Watch what she had to say during our webinar.

Diagnosing TAPS after birth is important as there are important things to know about it. TAPS is often confused with a similar condition, acute TTTS, and it’s vital to know the difference between the 2, as there are different treatment priorities, and the wrong treatment can be fatal.

For this question, we asked Dr. Lisanne Tollenaar. Her work with the TAPS Registry, and studying the long-term effects of TAPS has led to remarkable breakthroughs in how we perceive and treat Twin Anemia Polycythemia Sequence.
She also has an interest in how a diagnosis impacts families, and how professionals can factor this into consultations. Watch here.

Getting A TAPS Diagnosis

One of the biggest issues facing parents of twins sharing a placenta is that TAPS screening is not accepted worldwide. Many members of our community have had to fight for TAPS screening, and some have gotten their diagnosis after birth. Some have even lost their babies to TAPS.

Meet Bethany Beck, mom to Arielle and Ayla. Bethany fought to get MCA dopplers done at her appointments, and when they were finally done at an appointment, she was diagnosed with TAPS.
In this part of the webinar, she shares her TAPS diagnosis challenges and wins, and the story of her remarkable 29 weekers, Arielle and Ayla.

Resources To Help With A TAPS Diagnosis

We compiled a list of the best papers, and links from our website to help you understand a TAPS diagnosis. The papers that we’ve linked are from some of the world’s leading TAPS experts and will help you understand the process for diagnosing TAPS, and the treatments. If you have more questions, or want to learn more about TAPS, please email us at research@tapssupport.com.

Twin Anemia Polycythemia Sequence is a rare disease, but it doesn’t mean we shouldn’t screen for it. Learn more about our foundation on our website, and our determination to change the world for parents of twins.