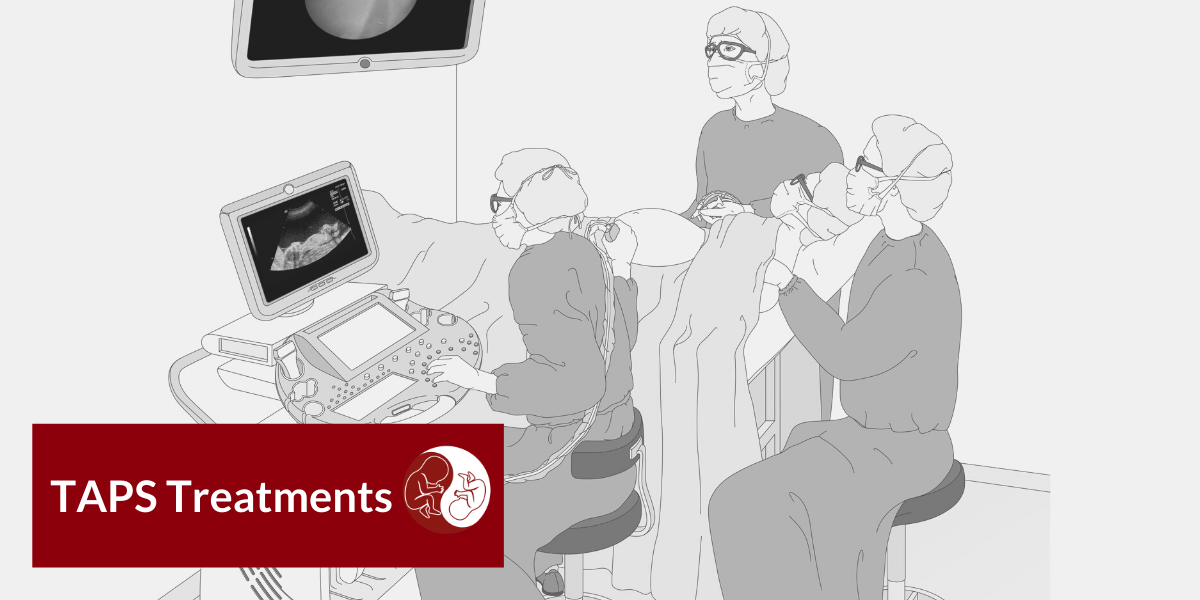 The biggest question we’re asked: How do you treat TAPS? Did you know there are many forms of TAPS treatment?  When it is diagnosed in utero, there are several options available. The jury is still out on what the best treatment is, but it is still important to know that these treatment options are available and discussed with patients.

How Do You Treat TAPS?

It is suggested that management decisions should be made after careful evaluation of different factors, including TAPS stage, gestational age, and the feasibility of the different types of intra-uterine intervention, such as the location of the placenta. Patients should talk with their care team, make a decision based on the treatment options available, and be guided by the expertise of their teams.

This is a watch-and-wait approach. Because of the slow nature of TAPS, regular MCA dopplers can gauge how fast it is progressing.  In this situation, you’ll be monitored closely every few days to check how things are going, but there will be no intervention unless something changes. Expectant management also allows for the chance of TAPS resolving spontaneously. In the recent TAPS Registry, around 16% of TAPS cases did resolve on their own.

Much like in TTTS, laser surgery will sever the connections between the babies and stop the blood from passing from one to the other.  Laser surgery is the only causal treatment for TAPS. The Solomon technique is used, drawing a line down the placenta and dividing it into 2 (like the story of King Solomon), and cutting the connections between the babies.  This is usually performed between 16 and 28 weeks.

One of the biggest limitations for laser surgery with TAPS cases is that there are no fluid differences. This does cause problems for visibility of the connections, as well as donors often having a larger placental share. In these cases, using Solomon laser surgery, an artificial TTTS environment will be created, giving one baby more fluid so that the vascular equator (or the divide between the babies) is easily seen. This does not cause any harm to the babies and will sort itself out without any issues.

In later pregnancy, this method buys some extra time for the babies.  The donor is given a blood transfusion in utero. This can cause risks for the recipient.

For this reason, intraperitoneal IUT is preferred, since intraperitoneal transfusion may allow slower absorption of red blood cells into the fetal circulation, preventing rapid loss of transfused blood in the circulation of the recipient twin.

IUT is a temporary solution and is generally done once or twice before preterm delivery.

In some cases, it’s essential to deliver earlier than expected.  This is usually when the window of laser surgery has closed, and it is expected that you can treat TAPS better on the outside in the NICU. TAPS twins treated with preterm delivery are generally diagnosed later in the pregnancy, and often have a lower TAPS staging (most often stage 1). These twins born with TAPS can be often better managed in the NICU.

While it is a difficult topic to cover, selective reduction is a treatment option. In some cases, where TAPS has caused a lot of problems, the option is there to terminate the pregnancy, or selectively reduce the number of babies in the hope of giving the healthier baby the chance to grow stronger and survive. In these situations, it is more likely the donor will pass, and this does not guarantee a complication-free pregnancy. Selective reduction is treated as a last resort, however, and is a private, personal choice for families. Our foundation believes that these families will be treated with respect and compassion, and supported.

After the babies are born, TAPS can be treated with a partial exchange transfusion for the recipient, and blood transfusions for the donor. It’s important to remember that twins born with TAPS have different treatment priorities to those born with acute TTTS.

While we don’t know the best treatments for TAPS, we do know that there are treatment options available.

Data from the TAPS Registry told us that there was no real difference between any of the treatment options in reducing perinatal mortality, but the most successful treatments for prolonging pregnancy were expectant management, laser surgery, and reduction. The highest neonatal mortality was recorded in IUT cases and premature delivery.

The TAPS Trial is working on establishing the best treatment. Established in April 2019, this randomized clinical trial is comparing Solomon laser surgery against expectant management, IUT, and preterm delivery.

The most important thing that we as a community advocate for is that all TAPS treatment options are discussed, with all the pros and cons of each treatment presented. Together, as a team you can make an informed decision on a plan of action, as families and doctors should be working together

While we don’t know the best treatment, it is still vital to offer all solutions, and consult with experts. Recent data suggests that somewhere between 40-63% of twins born with TAPS are diagnosed at birth, meaning that there is more of a chance of long-term effects and sadly, the potential loss of one or both twins.

We advocate that TAPS treatments should be individualized, based on the gestational age of the twins and the severity of the TAPS, and a decision made together with the family based on their wishes.

For more information on how do you treat TAPS, or if you would like to connect with us, email hello@tapssupport.com.