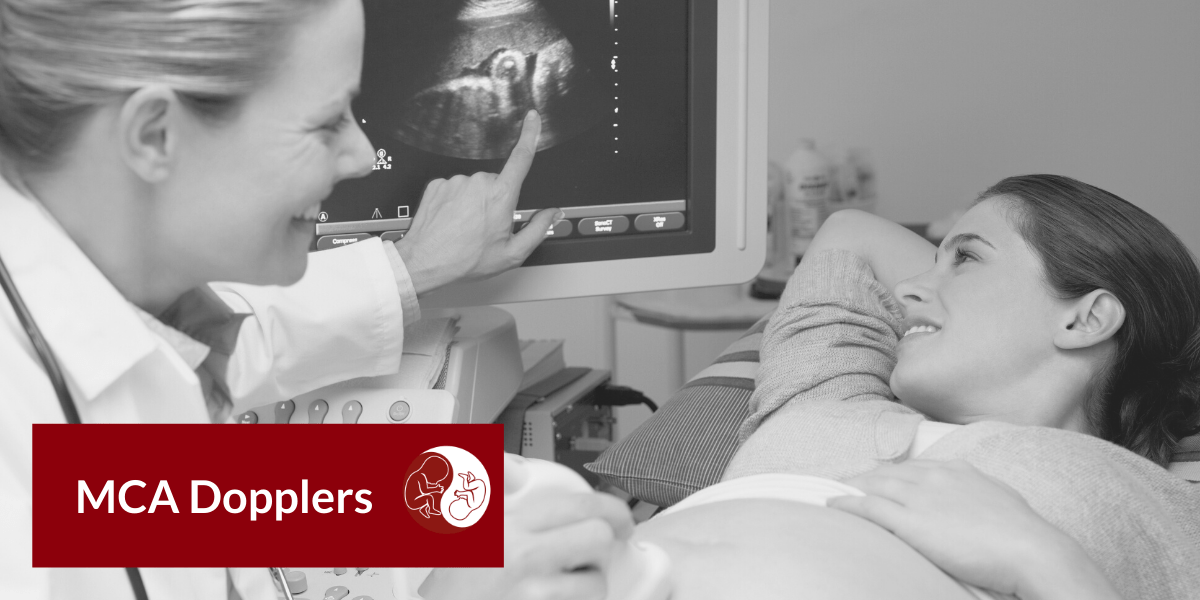 What exactly are MCA dopplers? Why are they so important? Let’s break it down.

What are MCA dopplers?

The MCA doppler is a non-invasive test. It measures the speed blood is going through the mid-cerebral artery.  On a regular ultrasound, this isn’t possible, as it uses sound waves to produce images, but with a doppler ultrasound, it bounces a higher-frequency sound wave off the red blood cells to show the blood flow.  The faster the sound waves bounce back, the faster the blood is moving.

What is the Mid-Cerebral Artery?

MCA stands for Middle Cerebral Artery, and it’s located in the brain. It’s one of the major arteries in the brain that supplies blood to the cerebrum (the largest part of the brain.) The cerebrum processes learning, memory, communication, and hearing. The blood flow affects the health of a baby’s brain, making it critical as it develops. The long term effects of spontaneous TAPS are devastating. MCA dopplers are essential.

Why do we need MCA Dopplers?

MCA Dopplers are crucial to diagnosing TAPS before birth.  They’re the only reliable way to diagnose TAPS that we know of, so far.  You need to have them done every 2 weeks from 16 weeks and tracked up to delivery.

TAPS has its very own staging system, used to predict the severity of TAPS.

They measure blood speed in centimetres per second and converted to an “MoM” (Multiple of the Median). This is just a fancy way of saying where you sit in relation to the average for your stage of pregnancy.  The average is always 1, and for twins, you want both twins to be sitting right around that 1, with minimal gap between them.  Curious? This tool can help you convert readings to an MoM.

From 2005, through to 2010, TAPS was diagnosed using cut-off values of <0.8 MoM and >1.5 MoM. Research progressed, and in 2010, a staging system was proposed. The values changed, and the first staging system was called the Leiden Staging System, and it is still widely used. If your team are using this – that’s absolutely fine – just make sure they’re aware of the newer one!

A 2015 paper suggested that delta MCA-PSV values could have more accuracy. This began the evolution of the current staging system.

TAPS is diagnosed when the babies meet 1 and 1.5 MoM or higher.  All cases did not meet these criteria, though. Some babies who were born weren’t always breaking those cutoff values (for example, MoM’s of 0.9 and 1.4). After birth, their blood tests and placenta confirmed they had TAPS.

It didn’t vary too far from the Leiden Staging System. It was still five stages, with stages 3-5 remaining the same.  However, the critical difference was that stages 1 and 2 changed.

Ultrasound can show other signs of TAPS   These markers are things like a “starry sky” liver in the recipient, or the donor twin’s half of the placenta looking brighter (echogenic), or an enlarged heart in the donor (cardiomegaly).  These markers reinforce the diagnosis. It’s important to remember that most cases will show at least one of these signs, these are often in the later stages of TAPS, and at least 14% of patients will have nothing more than a difference in their MCA dopplers.  That’s why it’s so important to have those routine MCA dopplers.

This revised staging system is slowly being introduced across the world. It’s important to remember that if your doctor is still using the older system, it’s ok. Make sure they’re checking those MCA dopplers, looking for the other signs of TAPS. As always, advocate for the proper testing before birth and after birth ensuring they do blood counts with reticulocytes and hemoglobin and check that placenta for small connections.

Need help advocating, or want to connect with others with a TAPS diagnosis? Why not join our Facebook group and connect with other families, researchers and meet a community of people passionate about TAPS advocacy.

We’re a registered non-profit organization. If what you’ve read has helped you, please consider giving a donation so we can continue our mission.