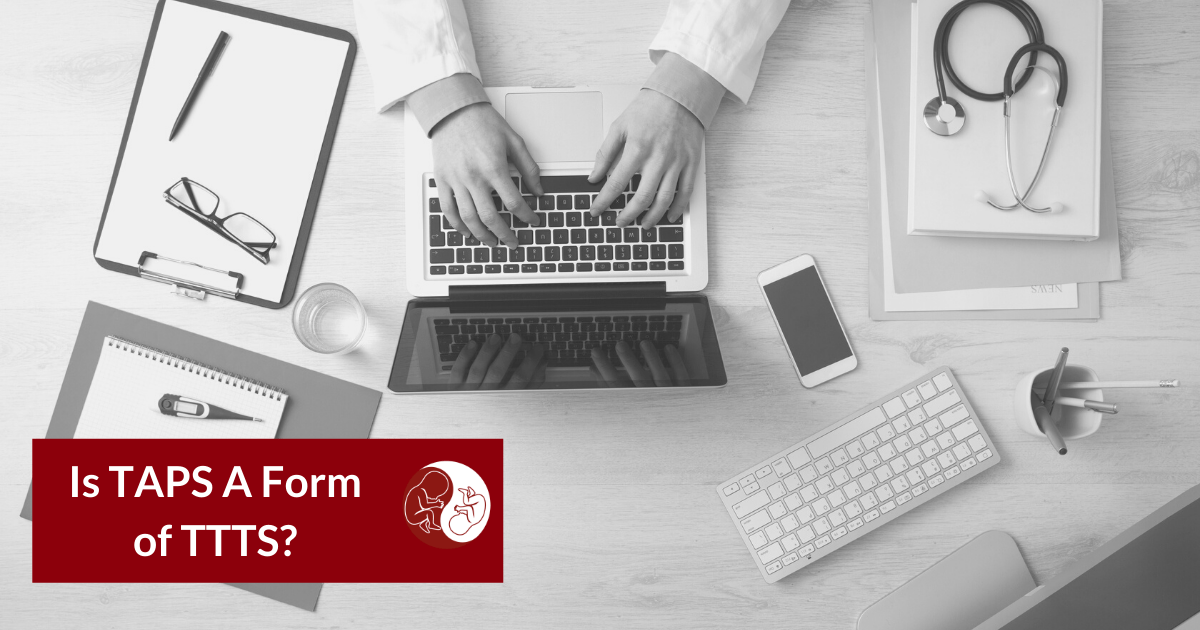 It’s also important that we recognize them as separate diseases, as they have different diagnostic criteria, different treatment options, and long-term outcomes. Referring to everything as a form of TTTS can actually be damaging to advocacy, and blur lines between treatments and diagnosis. That’s why we think it’s important to talk about the differences, and show you why this is such an important thing to change thinking on.

Images by Gautier Scientific Illustration and used under agreement and partnership with the LUMC Fetal Therapy Team.

If you look into history, you’ll see depictions of twins everywhere. There are even famous red and white twins, like the biblical story of Jacob and Esau, and the Wikkelkinderen of Muiderslot Castle.

In the late 1800’s, a German obstetrician was beginning to describe connections in the placentas of monochorionic twins, and he is also recognized as one of the first to actively describe the concept of transfusions between the twins.

Research into shared placentas and the transfer of blood between babies has been happening over many years. Of course with the evolution of technology, and more research we began to understand more about the concept of intertwin transfusion. We learned that the way cords were inserted into the placenta, how the placenta was shared, and even the types of blood vessels in the placenta had a big impact on the babies.

The arrival of ultrasound technology opened many doors, and in the mid-1980s pregnancy ultrasound was almost routine. The technology was developed further and, and in 1988 it helped guide the first fetoscopic laser surgery.

In 1999, the most widely accepted staging system for TTTS was introduced as well, meaning that diagnosis was easier. Everything that could go wrong with twins sharing a placenta was labeled twin-twin transfusion syndrome (TTTS). Size discordance? Different colors? All TTTS. But there were always puzzling cases where it didn’t fit TTTS criteria.

When babies were born different colors, it was just assumed that it was acute TTTS. But with the advances in monitoring and laser surgery, this shouldn’t be happening, right? But in 2006, the mystery was solved.

There are papers going back to mid last century describing twins born with anemia and polycythemia. But in the early 2000s, a new diagnosis came along, shattering the umbrella diagnosis of twin-twin transfusion syndrome.

On March 1st, 2006, 2 papers were published within days of each other. The first described a complication of laser surgery for TTTS, where one twin was born pale and anemic, and the other polycythemic. Robyrr et al described small connections in the placenta that were either missed by the laser or incompletely sealed in the process.

The second paper, by Lopriore et al, was published on March 3rd, and it described the same thing happening spontaneously in monochorionic twins. This paper is upheld by the TAPS community as the paper that gave our disease a name, It’s also the reason why International TAPS Day is on March 3rd!

What Is The Difference Between TAPS and TTTS?

In order to talk about the key differences, it’s probably best to break the 3 diseases that are most commonly called “forms of TTTS” into their own distinct diseases. This is so important, as all 3 are completely different.

It’s caused by tiny, artery-to vein (AV) connections in the placenta. These connections are less than 1 millimeter thick. Red blood cells flow from donor to recipient, causing chronic anemia in one twin, and polycythemia in the other twin. This is a long, slow transfer of blood at the rate of around 5-15ml per day. There are no physical signs for the parent for TAPS, unlike TTTS.

TAPS is diagnosed via doppler readings on the Mid-Cerebral Artery (MCA) before birth. There are other signs on ultrasound, like a starry sky liver for recipients, and cardiomegaly (enlarged heart) or echogenic (bright) placenta for donors. TAPS is diagnosed after birth using detailed blood tests involving hemoglobin levels and looking at the placenta for those tiny connections (via dye injection). The placenta should also be flipped over to check for a color difference between the 2 sections – because this is not present in acute TTTS.

There are 2 forms of TAPS: Post-laser TAPS happens after incomplete laser surgery for TTTS. It’s rarer than spontaneous TAPS.

PL-TAPS has different outcomes from Spontaneous TAPS. Before birth, donors are at a high risk of perinatal mortality (25%), and the long-term effects are similar to those of TTTS cases after laser surgery.

Spontaneous TAPS is the more common form, happening in around 3-5% of monochorionic twin pregnancies. The best treatment is yet unknown, but the TAPS Trial is working on this.

The long-term effects of spontaneous TAPS are quite devastating, with a high chance of neurodevelopmental impairment for donors, as well as 1 in 8 donor twins being born deaf.

What is TAPS? Illustration by Gautier Scientific Illustration and used with permission from the artist and the LUMC Fetal Therapy Team. Protected by copyright (see footer)

The TAPS Trial is investigating the best treatment for TAPS.

TTTS is diagnosed with fluid differences.  Most centers agree on Quintero staging,  with fluid levels <2cm and higher than >8cm, along with abnormal dopplers and hydrops in advanced stages.  TTTS can happen rapidly and is associated with some parental symptoms, like rapid growth of the belly, tight skin, fluid retention, and a sudden change in the movement of the babies.

The most effective treatment has been established, with laser therapy being the most effective way to resolve it.  Untreated TTTS has a high mortality rate, but successful laser surgery has a survival rate of around 75-80% for at least one twin.

It is also incorrectly cited that a high-protein can help prevent or cure TTTS, but there is limited evidence supporting this, and it is generally not endorsed by doctors who are up to date.

Overall, approximately 11% of pregnancies have some degree of neurodevelopmental impairment, with both babies equally affected.

SFGR and TTTS differ, in that TTTS is about blood flow in the placenta and SFGR is about placental sharing, cord insertions, and how the placenta is functioning. It also has its own classification system, known as Gratacós classification which divides it into 3 different distinct types.

Illustration by Gautier Scientific Illustration and used with permission from the artist and the LUMC Fetal Therapy Team. Protected by copyright (see footer)

The best treatment is unknown, with some centers doing laser surgery, and others choosing to perform selective reduction. However, an emerging consensus is close monitoring is possibly the best way to handle it.

Is TAPS A Form Of TTTS?

Hopefully, by now, we’ve shown you that no, they’re not. Twin Anemia Polycythemia Sequence (TAPS) and Twin Twin Transfusion Syndrome (TTTS) are both forms of feto-fetal transfusion. They have different diagnostic criteria, pathogenesis, treatments, and short and long-term outcomes.

Saying that TAPS is a form of TTTS is actually quite an old-fashioned approach to things, as we know so much about the differences between the 2 diseases, and in some ways, it can be damaging to the advocacy for introducing routine TAPS screening. The video below features Dr. Lisanne Tollenaar explaining more about the differences.

It’s been 15 years since the first papers on TAPS were published. But as TAPS families, we still fight for routine screening, long-term follow-ups and bust pervasive myths about our disease today.

We do know some of the long-term effects of both types of TAPS. This is why parents need to be told about TAPS and given the right to have screening included in their care.  They also need help to get follow-testing, such as the right hearing tests, and are taken seriously when they ask for long-term follow-ups.

Parents also need to be given the support and resources to advocate for their babies.

We need to recognize that TAPS is a real diagnosis with real consequences, as a severe disease that needs better recognition. Calling it a form of TTTS damages the urgency of changing screening protocols and raising awareness. TAPS twins deserve to have their diagnosis taken seriously, and access the correct treatments through their whole lives.

It’s time to change the way we talk about TAPS. Join the conversation in our Facebook group, and follow us on social media (@tapssupport). You can also make a donation to our foundation so we can continue to make a positive impact on twin research worldwide.