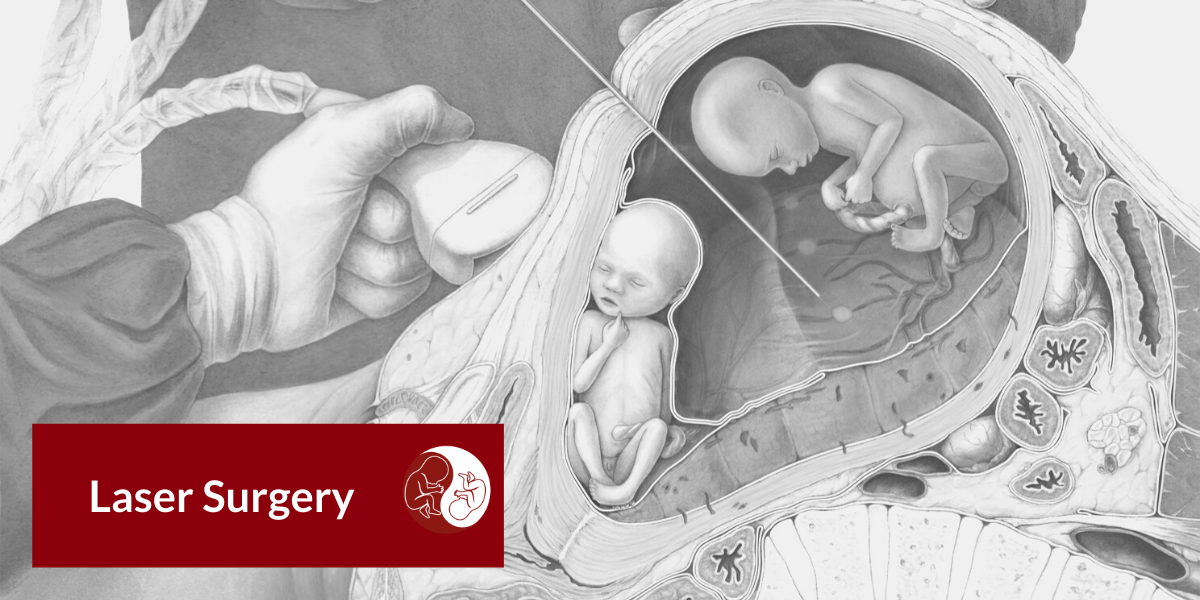 Laser Surgery has been an established treatment for twin-to-twin transfusion syndrome (TTTS) for a long time and has gone through many changes and variations over the years.  At the moment, 2 types of laser surgery are considered standard treatment for TTTS: Selective Laser Ablation and Solomon Technique.  This article will attempt to break down how they differ from each other. Solomon Laser is used for treating TAPS, or Twin Anemia Polycythemia Sequence.

What Does Laser Surgery Do?

We are grateful to Gautier Scientific Illustration and the LUMC Fetal therapy team for their generous donation of images for this article.  Images may not be used or replicated without their express consent.

Let’s look at a brief history of laser.  There are many articles out there that go into depth about laser therapy and its origins.  (We will give some links throughout the page for you)

In 1984, Dr. DeLia, and a placental pathologist named Dr. Bernirschke developed a technique using lasers to stop the connections between twins.  They actually used monkey and sheep placentas to practice.  Then, on October 3rd, 1988, the first laser surgery was performed on a TTTS patient.

Over the years, the technique was refined further,  with Selective Laser Ablation now being the most widely used treatment for TTTS.  In the early 2000s, a newer method was developed called the Solomon technique.  As you can see, science is continually evolving, with new types of lasers and techniques continually being refined. The objective is to improve survival rates and also be less invasive.

One of the biggest problems with this is that sometimes these connections are not sealed off entirely, or those tiny connections are missed. This can result in TTTS reoccurring, or post laser TAPS. This can happen in up to 16% of post-laser cases.

The Solomon Laser Technique is a recent development, that draws a line across the vascular equator of the placenta, right to the edges. It minimizes the risk of post-laser TAPS and TTTS reoccuring, because all the connections are sealed completely.

At this stage, the Solomon technique is being tested in The TAPS Trial against conventional treatments like transfusions and expectant management.

Want to connect with families who have had laser surgery? Why not join our Facebook group and connect with other families, researchers and meet a community of people passionate about TAPS advocacy.

We’re a registered non-profit organization. If what you’ve read has helped you, please consider giving a donation so we can continue our mission.