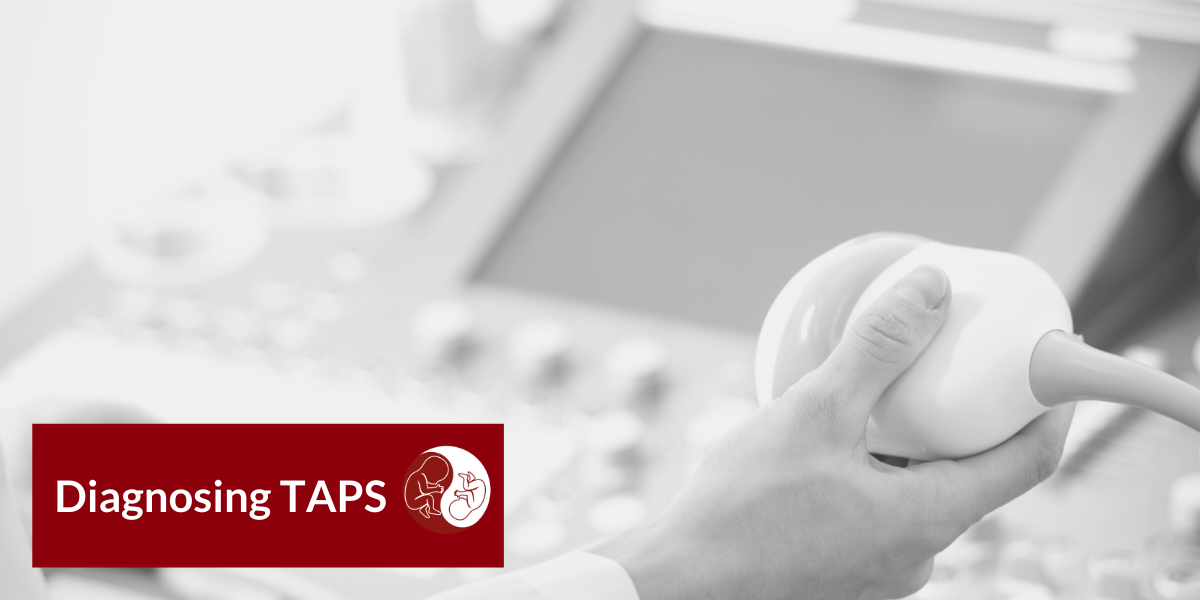 How can I get a TAPS Diagnosis?

There are 2 ways to get a TAPS Diagnosis – antenatally and postnatally. This article will explain both, and explain some important things you need to know about your TAPS diagnosis.

The most important thing to know is that the new Leiden Staging system is the most accurate way to diagnose TAPS stages before birth. TAPS staging looks like this:

Antenatal TAPS is diagnosed using Doppler measurements of the middle cerebral artery peak systolic velocity (MCA-PSV Doppler). This is an ultrasound to see how fast blood is flowing through each baby’s brain. Ideally, these should start between 16 and 20 weeks in your pregnancy. The middle cerebral artery is one of the major blood supplies to the brain and provides blood to the cerebrum.

The MCA-PSV Doppler measures the speed of blood going through the brains of your babies. This speed is measured in centimeters per second and later converted into a Multiple of the Median (MoM), which is a fancy way of saying it’s measured against the average speed for the gestational age of the babies. These points are plotted on a curve graphed from the median.

MoM’s should be around 1, or the average. However, what we do need to understand is that this was actually established in singleton babies affected by Rhesus disease, so it might not be entirely accurate when it comes to twins sharing a placenta – more research is needed. We also know that with the old staging system, there were many cases of TAPS being missed. So really the focus is not on staying around the “1”, but rather the difference between the babies (delta MCA-PSV).

And yes, there is a new TAPS staging system!

A TAPS diagnosis is suspected when one baby’s blood is flowing too fast, and the other too slowly. The anemic twin’s blood is moving quickly through the brain, and the polycythemic twin’s thick blood is moving very slowly. As the measurements move apart, this is a good indication of the stage of TAPS they are in.

What is important to also remember is that one bad MCA doppler isn’t a reason to panic. In most cases, especially if there are no other signs of TAPS, it’s just really telling us to check again in a few days.

Other signs of TAPS can be a starry sky liver in recipients, and cardiomegaly and a bright looking side of the placenta for donors. It’s really important that your team is also actively looking for these. While they’re not always present, at least 86% of TAPS cases will present with one, or more of these signs.

Of course, you can always convert your measurements yourself – just use this website and our handy record sheet.

In the above description, “Delta” 0.5 and 0.7 are referring to MoM readings that have a difference larger than 0.5 or 0.7. For instance, MoM readings of 0.9 in one twin and 1.6 in the other twin could indicate Stage 2 TAPS, because those readings are different by 0.7.

Both staging systems are fine, and it doesn’t matter which one your team uses – it’s just important to remember that both exist and that after birth, blood and placenta testing is vital to confirm a diagnosis.

Postnatal TAPS is diagnosed via blood testing and placental pathology. Your babies will need their reticulocytes and hemoglobin tested, as well as their placenta sent for pathology to be checked for tiny connections between the babies.

The placenta is dye injected, and tiny artery to vein connections in both directions will tell if you had TAPS. These are less than 1mm thick. It used to be thought these connections were only on the edges, but they can happen anywhere in the placenta (see above)

If there is a difference of more than 8.0 in the hemoglobin, and reticulocyte ratios are above 1:1.7, then this indicates that TAPS was present.

Of course, it’s important to get MCA dopplers every 2 weeks. (See our “Is Your MFM Your BBFF?” page for information on the checks you need during pregnancy). But also make sure your doctor is checking for the other signs of TAPS – in donors, a bright, or echogenic placenta, and an enlarged heart (cardiomegaly) and in recipients, a starry sky liver.

MCA Dopplers save lives. It’s time to bust the myths about TAPS screening. Join the conversation on our Facebook group, or get in touch if you want some help!