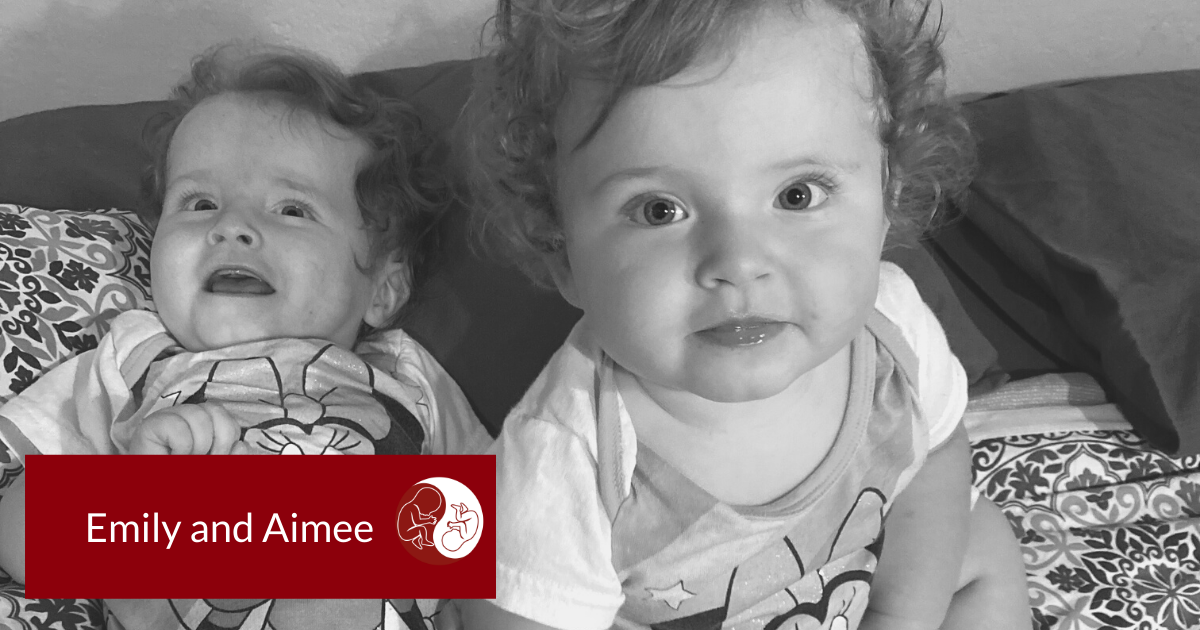 We would like to thank the Cowan family for sharing Emily and Aimee’s TAPS story. To find out how you can help support the family, please click this link, or scroll to the bottom of the page.

2020 was a big year.  Covid came and took over all our lives.  And it is in these Covid times that Emily and Aimee’s TAPS story began.

After blood tests and double-checking, I had to tell my husband that I am pregnant again at 43.  We already have two teenagers at this stage of 11 and 13.  There was no laughter and cheering, just three weeks of tears.  After I went to the doctor for the first time, another two weeks of tears because we found out it was twins – MODI twins.

As time went by and God provided a bigger house etc we as a family looked forward to the arrival of the twins.  With each ultrasound, we could not wait to see their faces, but the whole time Aimee did not want to show her face and she hid deep under my heart

At 16 weeks of pregnancy, we were informed that they are at the beginning of TTTS.  I was closely monitored.  Eight weeks later and the fetal specialist told us that the twins also developed Twin Anemia Polycythemia Sequence (TAPS) .  Not very well known in South Africa.  All that I have learned from TAPS, I have learned from your website and with that, I can advocate for the twins’ doctors.  Some of them up till today do not even know what TAPS is.

At 29 weeks, I was admitted to the hospital, so that the twins could be monitored 24 hours a day.  After three weeks in hospital, where only my husband could visit me, and I could not see my elder children due to Covid regulations the twins were born on 14 January 2021 at 32 weeks. We called them Emily and Aimee.

On the day of their birth, I was only able to see them for 3 seconds each before they were taken away to NICU.  Emily was the recipient and her little heart could not pump all the blood through her body.  After extracting the extra blood from her, they injected her with saline to stabilize her body.  Aimee was the donor twin, white as a dove.  They immediately started giving her blood transfusions.

Both the twins had jaundice and infections while in hospital.  Due to Covid, the twins were already more than a month old before their father could visit them for the first time. Emily went home after 48 days in NCIU.

Aimee was diagnosed with reflux and chronic lung disease, she had two more blood transfusions before her spinal cord started making red blood cells by itself and we were able to take her home with oxygen after 72 days.

In January 2022 she was fitted with a cranial helmet to shape her head properly.   If everything goes well, we will have the first cochlear implant on Tuesday, 17 May 2022

Aimee gets physio-, occupational and speech therapy every second week.  We have started a Back-a-Buddy campaign for her to help with paying all her needs .

We still have a long way to go.  I would like to say thank you, for your website and Facebook page and for all the information helping us through this time.  You mean more to us than you will ever know.

Shared with permission from Antoinette.

Donate to the family’s Back A Buddy Campaign here.