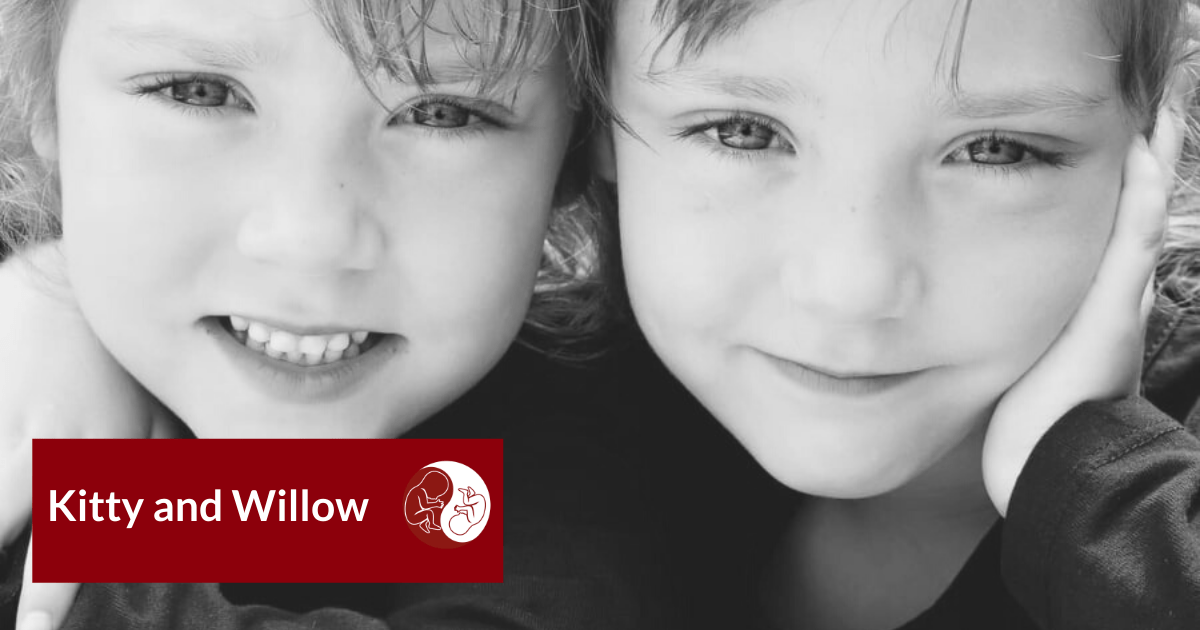 After coming out of NICU with my twin girls in one piece but my mental health in tatters, I looked forward to a life for my twins with tentative positivity. I hoped that the white knuckle ride of multiple pregnancy was behind me. I avoided all the twin and multiples groups I had joined because, in all honesty, I was afraid of what I would read and the trauma it would bring up in me.

This is my story of how advocating for a different diagnosis helped me to heal.

In 2014 I found out to my immediate delight that I was expecting Monochorionic Diamniotic (MoDi/MCDA) twins. This delight and excitement were somewhat short-lived, as before I had even left the appointment, I was bombarded with all the risks. From that point on, I had what I have referred to as a white-knuckle pregnancy.

I switched hospitals three times because I was not getting the standard of care I had learned was necessary to safeguard the health of my unborn twins. I was refused MCA doppler scans from 25 weeks. I was experiencing contractions around that time, and though I begged for MCA doppler scans, I was denied.

After a positive actim partus test, I was sent home only to go into spontaneous labor that began with my waters breaking three days later. We lived 40 minutes from the hospital, by the way.

My support was from people I had met online, including twin parents that had lost one or both twins. I made lifelong friends from the group.

My girls were born at 32.1 weeks. Twin one, Kitty, was pale and twin two, Willow, was deep red. They both fought hard to survive while I fought hard to get my milk in to sustain them.

Three weeks later, we took them home. Three weeks after that, their neonatal consultant pediatrician said they had sudden onset TTTS. He was the first doctor even to mention it, though I asked. With that said, he assured us all would be well and to remain positive.

Six and a half years later, two hearing tests, delayed speech, tantrums the likes of which I could never have imagined, sensory processing issues, anxiety, poor sleep, asthma, and delays, all in my former donor twin, Kitty

Now, six and a half years later, I have a diagnosis of TAPS.

How did I get here?

I had spent several years fighting to get referrals for Kitty because to me, she was showing all the signs of Autism Spectrum Disorder (her older sibling is diagnosed), but this was dismissed all the time.

After pathologizing  Willow, the twin that doesn’t have all her sister’s issues, I meet Stephanie Ernst. A chance encounter because I braved a Facebook twin group to ask a question about something completely unrelated.

Stephanie made time to talk to me about this subject.

During this conversation, I spoke about the issues we are facing as a family because one of my beautiful twins is tragically struggling so much. Stephanie was relatable and helpful, and we came onto the subject of birth and whether there were complications during pregnancy.

She heard my story and how the girls were born red and white with “late-onset TTTS,” and she suggested I look into whether my twins are TAPS survivors instead because of the issues with my donor twin.

“How can I get this looked at?” I asked.

“It will be hard because it’s likely the proper tests weren’t done, but we can go through what information you need to talk with your pediatrician about. I can get you the right papers to support this. Did you have MCA doppler scans?” Stephanie asked

“I don’t know,” I replied. I did; however, search my messages and emails, and it turned out no, I had not from 25 weeks onwards despite me begging.

“Do you know their blood results from birth?” Stephanie asked

“No, but I can get a freedom access request and ask to speak to their neonatal pediatrician,” which I did.

“Do you have a picture of the placenta?”

Who has a picture of their placenta?

It turns out I do. My partner took a picture of it. One side is dark and the other light.

“Have you had the donor twin’s hearing checked?”

“Yes,” I reply, “twice, and they found no issue, but I am convinced she has hearing issues because her speech isn’t clear and was delayed” It turns out she did but not the specific test she would need as a TAPS Donor twin

I sent all the records and the papers, emails, website links, and webinar recordings off to their doctors. I waited for a response and hopefully answers on how to help my girls best.

Six and a half years later and I receive an email from their neonatal pediatrician diagnosing TAPS.

Positive Change And A TAPS Diagnosis

Now I can advocate for my Donor twin and allow my recipient to be as neurotypical as she is. The pediatrician is making referrals that will benefit her and help her grow in her way.

I am so grateful for Stephanie and TAPS Support for helping me look at my twins independently from each other and investigate and search for answers to help them both.

Knowing this now makes so much difference in how I go forward and advocate for my daughter. Of course, knowing this previously would have also made all the difference in supporting Kitty’s development.  But now, we have a diagnosis, and we can move forward to helping her get the help she needs.

The relief and the joy at knowing we finally have a correct diagnosis cannot be described.

See an adorable moment caught on film, and featured in the Daily Mail between Kitty and Willow here.