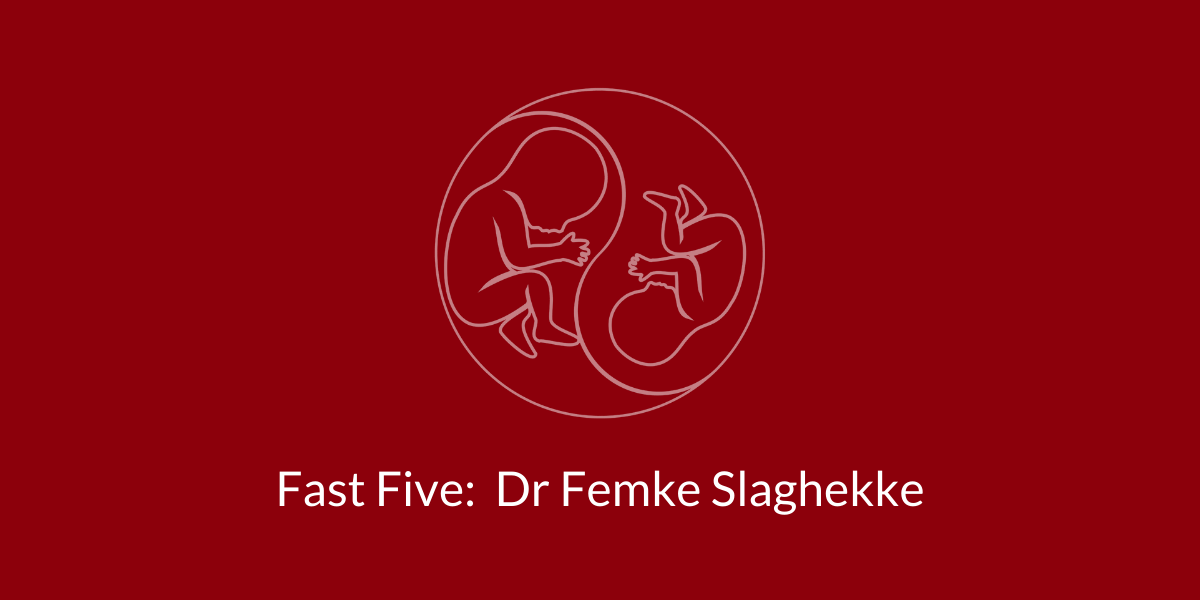 Welcome to the TAPS Support Fast 5, our series dedicated to introducing you to the researchers and doctors behind Twin Anemia Polycythemia Sequence across the world. In this installment, we’d love to introduce you to Dr. Femke Slaghekke, from the Leiden University Medical Centre in Leiden, the Netherlands.

You might know her name from some of the most important papers about the development of Solomon laser therapy for TTTS, and TAPS. We’re extremely grateful she took time out recently to discuss all the important things about TAPS with us, and tell us more about her important work.

Thank you for your time, Dr. Slaghekke! Tell us a little about yourself, and what drives your passion for TAPS research?

My name is Femke Slaghekke, I’m a Maternal-Fetal Medicine (MFM) Specialist and Fetal surgeon at the LUMC and passionate about identical twins, especially TAPS twins. My TAPS journey started in 2007 when I started as a sonographer at the LUMC after finishing Medicine.

TAPS was very recently described by the fetal therapy team and we started the Solomon trial to prevent post-laser TAPS in 2008. During my Obstetrics and Gynaecology Residency, I stayed involved with TAPS research projects and as part of my MFM specialist training, I worked at the Mater hospital in Brisbane, Australia. During this journey I got to know Stephanie, founder of the TAPS support group, we share the passion to improve outcomes for TAPS twins.*

Next to my passion for TAPS I love to spend time with my family (husband, daughter, son, and a dog) and go for a run.
* (editor’s note: We met when you asked me to share my patient journey and tell “that story” at your symposium/Ph.D. defense nearly 7 years ago, and I think we stayed in touch ever since!)

I was involved in TAPS research from the very beginning and the more we learn the more we need to find out . For example, we recently learned that TAPS donors are more at risk for bilateral deafness, this was an unexpected finding and we need to research why are these donors at risk and what can we do to prevent this?

I would like to advice to all monochorionic twins that they make sure they get screened for TAPS (by measuring MCA-PSV Doppler flow measurements) every 2 weeks. Once you’re diagnosed with TAPS discuss this with your doctor and if your doctor is not aware of or familiair with TAPS make sure you get referred to a specialised center.

Intensive research to look at the outcome of TAPS twins showed us that the risk of impaired long-term outcome is comparable to the outcome after TTTS (risk of long-term neurodevelopment delay and bilateral deafness in donors) and therefore TAPS is not a little brother or sister of TTTS but can be a severe complication. It’s important to screen for TAPS so we can treat TAPS in time if necessary, to improve outcomes for TAPS twins.

Dr. Slaghekke, thank you so much for your time and your passion for TAPS screening and research.  Your work in changing the landscape for monochorionic twins, in particular, the treatment for TTTS and TAPS with the Solomon Laser Technique has made a huge impact on many of our family members.