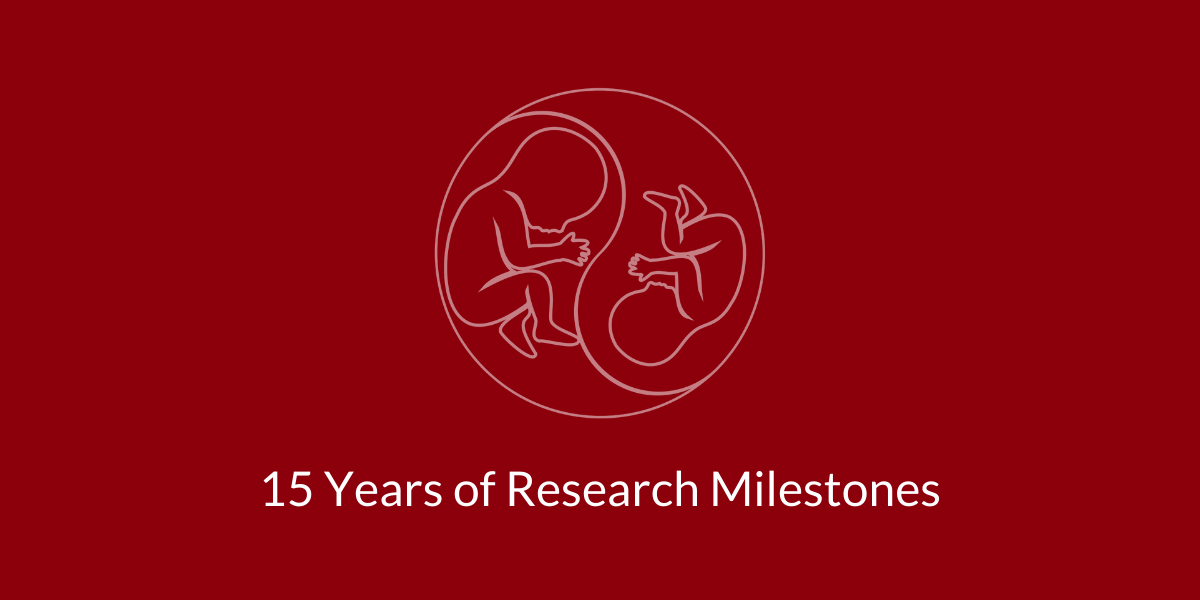 Welcome to International TAPS Day! Today we’re highlighting the incredible, ground breaking research that has been done over the past 15 years into Twin Anemia Polycythemia Sequence, and discovering more about what the future holds for TAPS research. We’ll be breaking down myths, sharing facts, marking milestones and celebrating the research that has been done into TAPS. Let’s celebrate TAPS research!

The First Papers For TAPS Research

The very first paper, published on March 1st, 2006 describing a unique complication of TTTS laser surgery, reinforced the need for routine MCA dopplers to be performed on patients.  This complication was caused by tiny, residual connections in the placenta, and left one baby anemic, the other polycythemic.

Just 2 days later, a second, revolutionary paper was published.  This paper described the same condition as happening spontaneously in monochorionic twins.  When the placentas were examined, it was discovered that this was caused by tiny, one-way connections in the placenta.  This paper also gave the disease a name:  Twin Anemia Polycythemia Sequence, or TAPS.

It’s All About Size and Speed

It’s incredible to think that this problem is caused by just a few tiny connections in the placenta.  Research has told us that this disease happens slowly, over a long period of time, and that the actual amount of blood transferred from donor to recipient over 1 day is around 5 milliliters at 29 weeks gestation.  The average blood transfusion for a 1 kg baby is 15 milliliters.

Staging TAPS has always been a challenge, and while the post-natal staging system has stayed the same, the ante-natal staging has been refined and improved over the years. The very first paper on TAPS suggested the cutoff values of <0.8 and >1.5 MoM as the standard, but 15 years later we now know that delta MCA PSV is more accurate, and predicts TAPS with more reliability. The new TAPS staging system was introduced in 2019. We wrote a blog about the history of staging, but if you’re interested in the science, then follow this link.

A big step in both the prevention of post-laser TAPS, and the treatment of spontaneous TAPS was the development of the Solomon laser technique – and the clinical trial that helped prove this .  The aim of the trial was to show improved survival outcomes, but also reduce the risks of post-laser complications by drawing a line down the placenta, effectively reducing the risk of small connections being left.  The Solomon Study compared selective laser ablation versus Solomon laser.

In post-laser TAPS, most of the residual anastomoses are on the border of the plaenta, which also emphasises the need to laser all the way up to the margins as well.

The best TAPS treatment remains unknown, but what is known there are several treatment options.  From in-utero transfusions to early delivery, to laser surgery, all options should be discussed and the benefits and risks discussed with patients who have a TAPS diagnosis. There is a lack of consensus about how to treat TAPS as well, which was highlighted in the TAPS registry. TAPS treatment is controversial, and there is no international consensus (yet).

There is a current clinical trial in place – The TAPS Trial – which is testing laser therapy against other treatment options in order to establish the best treatment for TAPS.  Patients between 20, and 28 weeks gestation who have stage 2 or higher TAPS, may be offered the opportunity to participate in the this trial. Discover more about the TAPS Trial here. TAPS research is vital.

The Importance Of MCA Dopplers

We’ve heard for years the importance of MCA dopplers in detecting TAPS, and improvements to the staging system means that we now know that this is an incredibly acurate way of detecting TAPS in utero. But did you know that up to 86% of cases will present also with at least one other ultrasound marker for TAPS?

These other signs are a bright, or echogenic placental share for donors, an enlarged heart, or cardiomegaly also for donors, and for recipients, a starry sky liver.  These additional markers are found more commonly in advanced cases of TAPS, but what’s important to take away here is that 14% of TAPS cases present with nothing more than discordant MCA dopplers.  It’s important to raise awareness that there are other signs of TAPS, but also that we need to urgently introduce routine MCA doppler screening for monochorionic twins.

We could talk all day about the TAPS registry, and the amazing international insights it gave us into worldwide views on the treatment and diagnosis of TAPS.  17 incredible fetal therapy centers across the globe collaborated on this project, and we discovered so many important facts about TAPS. Choosing a favorite fact from this registry is almost like choosing your favorite fetal therapy center – we love them all.  But we’re huge fans of TAPS research

But possibly the most interesting fact that was found was that TAPS has an equal chance of happening anywhere between 15, and 35 weeks. There is no “window” of increased risk – it’s an equal chance throughout the whole pregnancy.  This really emphasizes the need for screening for TAPS to begin by 16 weeks, and continue up to and including birth. What it also highlights is there is a need for more international collaboration, and research into TAPS so we can understand even more about this disease.  After all, if 370 cases of TAPS can bring us so much insight, imagine what routine screening and pooling data could do.

However, as research evolved, and especially with the help of the TAPS registry, it was discovered that post-laser TAPS donors were at a very high risk of perinatal mortality – up to 37% – meaning that they are at a huge risk of death before and after birth.

The long-term effects of spontaneous TAPS were virtually unknown until the publication of the first paper into this in 2019.  When we say this truly shocked the research world, no one was prepared for the revelations that this paper brought. Up until this point in time, it was believed that TAPS was a mild disease, with nothing too serious to worry about.

What was discovered instead was that there was an extremely high risk of neurodevelopmental impairment in donor twins (44% chance, compared to 18% in recipients).  There was also a startling new discovery – donor twins were also at risk of bilateral deafness at a rate of 1 in 8.  It really emphasized the need for long-term follow-ups for TAPS twins, in particular donors so they can get the support and early intervention needed.

We think that it’s important to pull this fact out on its own.  Spontaneous TAPS has a previously unheard of long-term effect. Donor twins are at a 15% chance of a type of deafness known as Auditory Neuropathy Spectrum Disorder, or ANSD.

What’s truly remarkable about this is that while it is recorded in prematurity, it has never been recorded at such a high rate, and only affecting one small population.  It has also never been recorded with TTTS donors who are born anemic or in babies born with fetal alloimmunization (also born anemic).  This is a remarkable, and incredible finding, highlighting the need for routine screening and intervention before birth, but also the need for ABR hearing testing to be done at birth for TAPS donors.

A fascinating finding, alongside the fact that donors can have a bright appearance to the placenta, was also that at birth, an easy way to differentiate TAPS from acute TTTS was to flip the placenta over and look at the maternal side. There’s a really obvious difference in color in TAPS placentas, with donors pale, and recipients dark red.

This distinguishes them from Acute TTTS placentas, where there is very little color difference.  Combined with blood counts on reticulocytes and hemoglobin, this is the most reliable way to diagnose TAPS after birth.

How Many Connections And Where?

There are huge differences in the number and positions of connections in TAPS placentas when it comes to comparing spontaneous and post-laser TAPS. Post-laser TAPS is often small residual anastomoses (1-2) on the outer edge of the placenta, emphasizing the need to perform laser surgery all the way to the edges. But for spontaneous TAPS, there are often double that number of connections, and they can be located anywhere in the placenta.  The most important thing is that after birth, pathology is done on the placentas!

It used to be thought that most of the time in post-laser TAPS, donors and recipients would “switch places”. Thanks to the TAPS Registry, we actually know this happens only in around 55% of cases.
It’s also a common myth that post-laser TAPS is more common. It only happens in a small portion of an already small group, meaning it’s actually rarer than spontaneous TAPS.

TAPS Is Not A Form Of TTTS

15 years of research into this incredibly rare disease has taught us many things. We know how to look for TAPS, we know how to treat it (although the best treatment is still unknown, and we know the long-term outcomes.  But still, this myth persists that it’s just a form of TTTS and many doctors do not take it seriously. It’s time to introduce routine screening protocols, and raise awareness of how to diagnose, treat and follow up twins born with TAPS.

TAPS is not a form of TTTS. It’s a separate, serious disease that needs to be taken seriously.  #tapssupport #tapsisreal