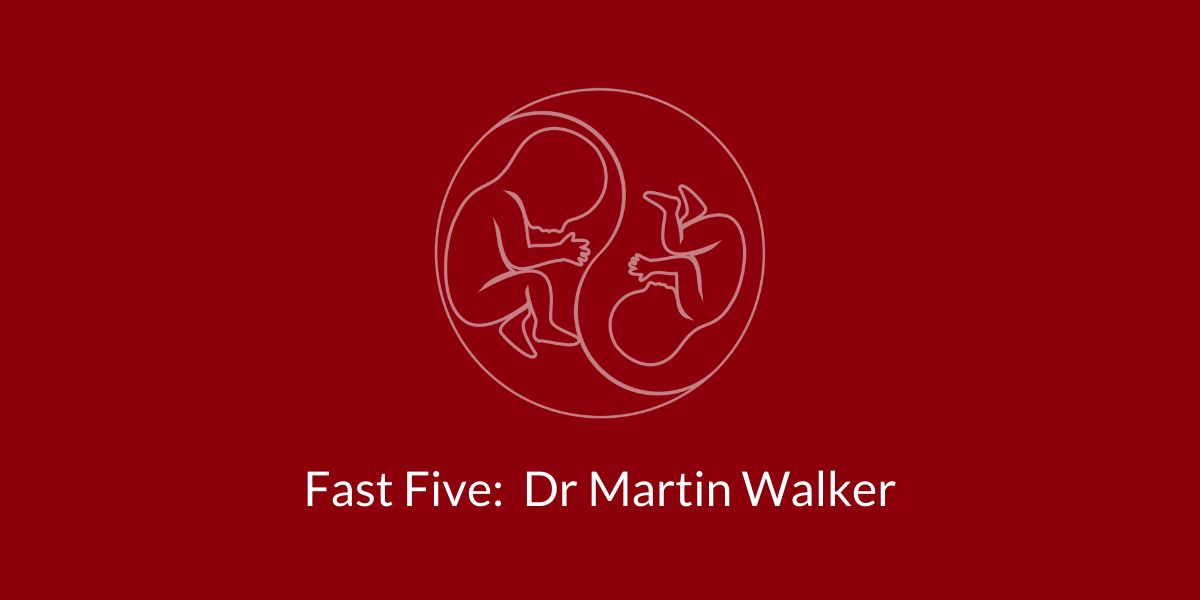 Welcome to the TAPS Support Fast 5, our series dedicated to introducing you to the researchers and doctors behind Twin Anemia Polycythemia Sequence worldwide. In this installment, we’re introducing Dr. Martin Walker, the other half of the dynamic duo based at Seattle Children’s Hospital with Dr. Bettina Paek

Dr. Martin Walker has also trained worldwide, and his global outlook helps bring the latest research to the northwest of the United States.

This creates a fantastic resource for patients in that region and provides an even better standard of care for parents of monochorionic twins.

Tell us a little about yourself.

I trained in the United Kingdom at the same medical school that Professor Nicolaides worked at as a young man. I subsequently moved to Canada for my residency and the University of California, San Diego, for my maternal-fetal medicine fellowship.

While at UCSD, I had the great pleasure of meeting Dr. Julian DeLia. At that time, he had just begun managing twin to twin transfusion syndrome using laparoscopic instruments. I was immensely impressed with this strategy and its potential ability to cure this terrible condition.

I have also had the opportunity while taking a sabbatical to work with professor Nicolaides at Kings College Hospital in London, learning fetoscopic laser ablation procedures.

Evergreen Hospital in the Pacific Northwest was where we started the 1st fetoscopic program to treat twin-twin transfusion syndrome in 2002.  We used the same instruments proven in the Eurofetus trial to be both safe and effective.

Since that time, I, and my practice partner Dr. Bettina Paek, have treated many hundreds of complicated monochorionic twins. We are both now involved in moving our practice to Seattle Children’s Hospital and spearheading a new fetal therapy program based out of that site. It collaborates with pediatric surgeons, neuro-developmental specialists, pediatric cardiologists, and many others.

TAPS was the scourge of early fetoscopic laser ablation procedures. Post-procedure TAPS occurred in up to 10% of patients in some series. Although we were lucky to have very few cases, it was clearly a disaster when it happened.

Subsequent research and development of the laser technique to include Solomonization of the placenta after laser ablation has thankfully all but eliminated this complication. It did not take long, however, to realize that spontaneous TAPS was also a significant issue. This is an issue that goes undetected until fetal demise unless it is screened for explicitly.

It has been extremely frustrating to see our professional organizations ignore the importance of routine middle cerebral artery velocity Doppler evaluation in otherwise uncomplicated monochorionic twins.

I hope that our program can push practice in the Pacific Northwest to screen for TAPS and hopefully ensure adequate and timely management of TAPS in our population.

What’s the most critical piece of information about TAPS you want to share?

The most crucial piece of information about TAPS that I wish more obstetricians realized is that it can occur in any pair of monochorionic twins at any time in pregnancy. Without active surveillance, it will be missed.

TAPS can evolve at a rapid rate, and early detection and management are essential to healthy survival. In some ways, TAPS is more insidious and more devastating than twin to twin transfusion syndrome, even though it is less common.

For patients who have been diagnosed with TAPS, firstly, congratulations on finding someone who recognizes the problem and knows how to diagnose and manage it.

If you have not yet met with a team with the expertise to do fetoscopic laser ablation for Twin Anemia Polycythemia Sequence, I would suggest that you reach out to discuss your diagnosis with the closest team to where you live.

Most teams are more than happy to review ultrasound reports and discuss your case with your primary providers. Of course, we are all willing to see patients with TAPS at any time for a hands-on evaluation.

If you do not specifically screen for TAPS using middle cerebral artery velocities, you will not diagnose it until one or both babies are critically ill or worse.

Unlike Twin-to-Twin Transfusion Syndrome, it is not immediately obvious that TAPS is happening. Without screening, TAPS will progress undetected and caused devastating injuries to many of the affected pregnancies.

Screening for and early diagnosis of TAPS allows for intervention planning to save these pregnancies, whether fetoscopic laser ablation or premature delivery.

Screening for TAPS is critical. In ALL monochorionic twins.

Thank you for your time, Dr. Walker, and we appreciate your enthusiasm and honesty here.  Naturally, we agree that TAPS screening is vital, and it’s exciting to hear it coming from experts as well. We’re grateful to you and Dr. Paek for your honest answers and support.

If you missed any of our fast five interviews, you can find them here. Who’s next in the series? You’ll have to wait to find out this time 😉