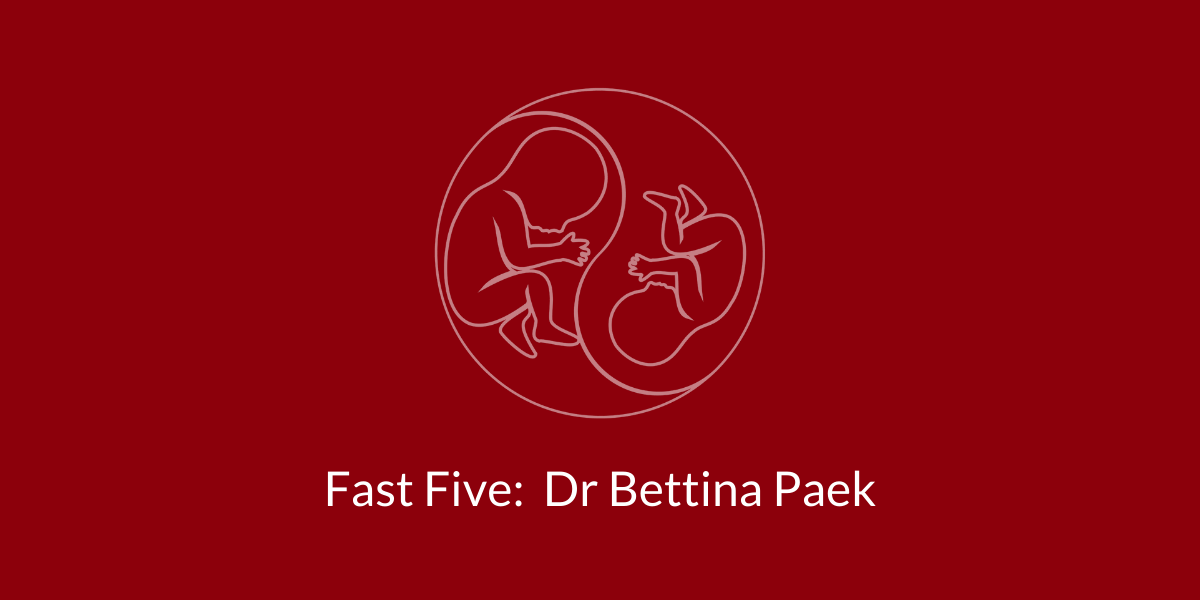 Welcome to the TAPS Support Fast 5, our series dedicated to introducing you to the researchers and doctors behind Twin Anemia Polycythemia Sequence across the world. In this installment, we’d love to introduce you to Dr. Bettina Paek, from Seattle Children’s Hospital in Washington State.

Dr. Paek started her career in Germany but has lived and worked across the world. Her global outlook on research and management of monochorionic twins has led to her being well respected in the field and up to date on the latest research developments. Together with Dr. Martin Walker, they create a dynamic and incredible duo dedicated to saving lives. We’re lucky that she took time to answer our questions out of her busy schedule, which covers a significant portion of the north-western United States.

Dr. Paek, can you tell us a little about yourself? What were your beginnings, where you trained, and how you started your extraordinary partnership with Dr. Walker?

During my residency in Obstetrics and Gynecology, I trained in Germany and became very interested in fetal therapy. This led to my researching different labs and applying for a research grant to spend a year doing a research fellowship at UCSF’s Fetal Treatment Center with Dr. Mike Harrison.

During that time, I was able to participate in the evaluation and laser ablation for TTTS. One year turned into three, and I decided to stay in the US and came up to Seattle to re-do a clinical residence and fellowship.

I took advantage of research and clinical electives to spend some months in London with Kypros Nicolaides and Hamburg with Kurt Hecher, learning more about the best laser techniques. When I finished the fellowship, I joined Dr. Walker, and we’ve been working closely together for the last 14 years!

Why are you so passionate about TAPS and TAPS research?

The only reason this can be attributed to is the fact that these twins have blood vessel connections on the placenta.

The problem with TAPS is that it is relatively “silent.” It does not lead to massive increases in the fluid that would alert the pregnant person to seek care.

Unless the physician performs peak MCA velocities, it will not be diagnosed. It may contribute to the increased risk of “unexplained” stillbirth in monochorionic twins.

Unfortunately, in the US, the national societies do not recommend screening with peak MCA

It’s essential to screen for TAPS with peak MCA velocities.

It cannot be diagnosed in the absence of screening until the babies are very sick and in advanced stages.

We are studying TAPS to learn more about it. Only tiny connecting blood vessels lead to an imbalance of blood, but not different fluid levels.

At the time of surgery, we can count the number of connections and assess their size, but there is no way to determine with by ultrasound. That means there really isn’t a way on ultrasound who is at risk of developing TAPS.

What is your advice for patients who have been diagnosed with TAPS?

If your doctor has diagnosed you with TAPS, they are obviously aware of TAPS, and you are already in good hands!

Ask your doctor what the best treatment and follow up schedule might be. This will likely depend on what stage TAPS is and how fast or slow it progressed and how far along you are in pregnancy.

Reach out to the TAPS Support group as well for peer support.

Obviously, I think it is vital to screen for TAPS. Otherwise, we won’t really know how common it is in pregnancies that have not undergone prior laser for classical TTTS.

We are collecting more data, publishing, and research and lobbying for insurance companies to cover the cost and national societies to recommend this screening.

Dr. Paek, thank you so much for your time and your passion for TAPS screening and research.  We’re grateful for your enthusiasm to help change the TAPS landscape, particularly lobbying the overseeing bodies and insurers for this change.

Usually, we leave this one with a guess who’s next to be interviewed, but in this case, we think it’s obvious that when you interview one part of a dynamic duo, the next one is close by… stay tuned!

If you are interested in the paper that Dr. Bettina Paek discussed in this interview, follow this link.