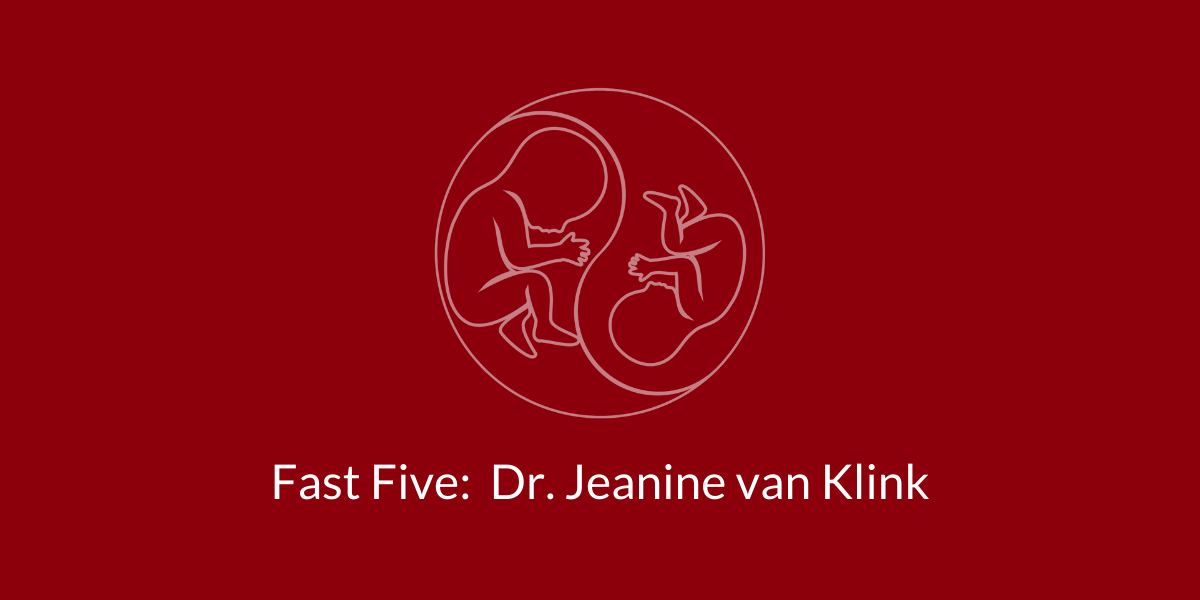 Welcome to a new series of blog posts by TAPS Support. Our team is passionately following research, but we felt it was time to dive deeper into the stories of the people behind Twin Anemia Polycythemia Sequence. It’s time to introduce the TAPS Support Fast Five, and this week we’re introducing Dr. Jeanine van Klink.

In this series, we talk to the researchers and doctors who have dedicated their lives to researching TAPS and other diseases affecting monochorionic twins.

It’s been a while since we did one of these interviews, but this one is worth the wait.

We’ve talked a lot about the medical side, but there is much research into TAPS’ psychological side.  In particular, we’re also interested in the long-term effects of TAPS on our babies.

Enter Dr van Klink, assistant professor at the LUMC and head of the long term follow-ups for TAPS twins born at the LUMC. We’re incredibly excited to bring you the other side of research in this interview.

Thank you so much for your time today – tell us a little about yourself and what you do in TAPS research?

I am Jeanine van Klink, mother of Fiene (7 years) and Thijs (4 years).

I work as an assistant professor at the LUMC Department of Pediatrics, Division of Neonatology. My background is in Clinical and Developmental Psychology (UvA) and received my Ph.D. in 2015.

As a member of the LUMC fetal therapy team, I am responsible for the long-term follow-up of all children (and their parents) who received fetal treatment for a fetal disease, including monochorionic twins born with TTTS, sFGR, and more recently TAPS.

TAPS is a relatively new disease, and we still have so much to learn and research. Long-term follow-up of TAPS twins until at least school age is crucial for determining the best fetal and neonatal treatment options. It’s also essential to establish evidence-based counseling of (future) parents and implement adequate follow-up care in this high-risk population.

What’s the most critical piece of information about TAPS you want to share?

We performed a long-term neurodevelopmental follow-up study in 74 TAPS survivors. We detected that TAPS donor twins have a fourfold higher risk of neurodevelopmental impairment compared to their recipient co-twin and are at an increased risk for cognitive delay and deafness (based on an auditory neuropathy spectrum disorder (ANSD). Our long-term outcome studies never showed these striking differences between donors and recipients in TTTS nor in children that suffered from fetal anemia based on erythrocyte alloimmunization

Get the right support, from your doctor (GP/fetal medicine specialist), from a social worker or psychologist specialized in pre and perinatal care.  Connect with other TAPS parents via the TAPS Support Foundation to get the right information, to share your experience, and to treat or prevent the development of mental health problems. Keep a diary to write your thoughts down in this turbulent time.

Most importantly, when hearing screening is done on your TAPS babies, make sure the doctors use the correct test. The standard neonatal hearing screening that uses Otoacoustic Emission (OAE) cannot detect ANSD. A specialized test, the ‘Automated Auditory Brainstem Response’ (AABR), should be used. Last, advocate for long-term follow-ups and go to the appointments!

A pre or postnatal diagnosis of TAPS is of utmost importance since these twins are at increased risk for NDI and need adequate follow-up care. Early detection of hearing loss by newborn hearing screening using AABR and subsequent early intervention (hearing aids, speech therapy) is required to prevent unnecessary developmental delay. It improves speech- and language development in children with impaired hearing. Also, routine long-term follow-ups at 2-, 5- and 8-years have been implemented into the standard care for TAPS twins managed, born, or treated in our center.

Thank you so much for your time, and we are truly grateful for the work you have done on the long term effects research. It truly makes life easier when we try to advocate for testing and follow-ups to have the research behind us.

Stay tuned for the next installment of the TAPS Support Fast Five. Whom will we speak with next?  What will the topic be? Find out soon …

If you are interested in Dr. Jeanine van Klink’s thesis – you can find it here – Long-term neurodevelopmental outcome after fetal therapy.