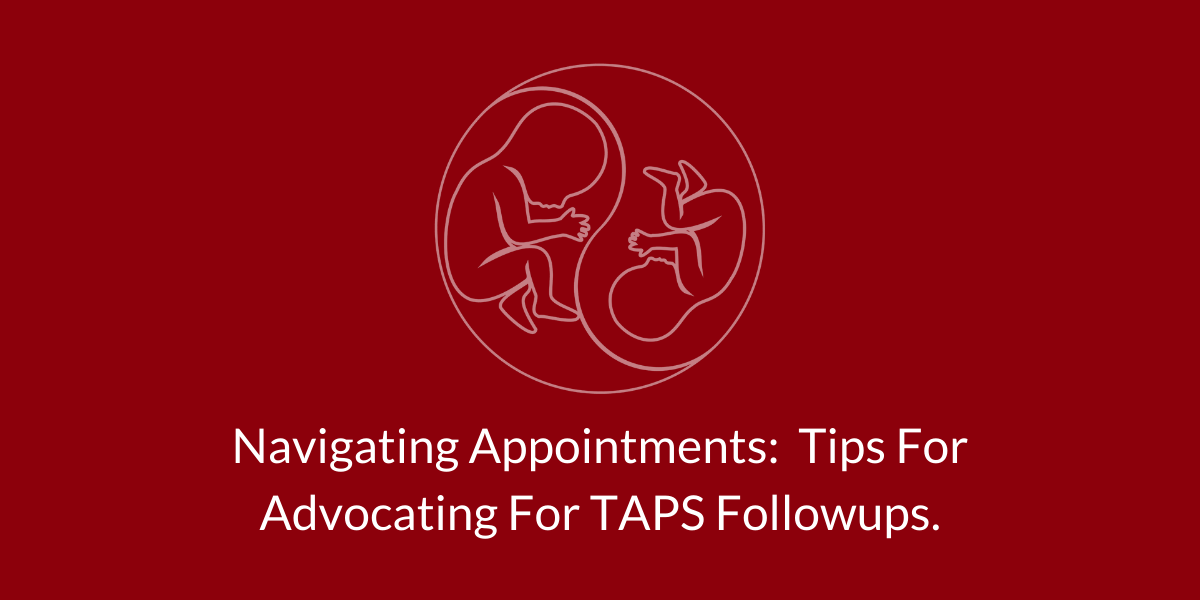 Where on earth do you begin when it comes to advocating for long term care for TAPS? It’s a long, tedious road at times, and sometimes even exhausting. Advocating for TAPS starts with some basics, and Stephanie shared her tips on how to get things moving.

(Or maybe it’s more like a how a regular mom takes on the system and tries her best.)

I’m going to be brutally honest here. I’ve been dealing with TAPS and advocating for my kids for 6 years, and even with the changes and development in research, a lot of things still haven’t changed. I’m hoping that I can at least give you some tips and hints here that have either been stumbling blocks or roadblocks for my own TAPS journey that can help you.

Tip 1. Get yourself a folder and a good diary.

In the early days, it will help you keep track of things and appointments, and you can also keep copies of reports and referrals in there. Keep copies of correspondence, results in there. You may need to refer back to something or to even something a different doctor has done or asked for. Trust me, your folder will be your lifeline. In your diary, jot down short notes after each appointment. This also helps you refer back to things later.
Hint: I use Google Calendar now as well. I put photographs or digital notes into the events I create on there for reminders as well.

There are going to be moments in your life where you are the only person in the room who has heard of TAPS. Shocking, right? Not really. We are talking about a disease that is really only 15 years old, it happens in 3-5% of identical twins (who are already rare!) so it’s not really hitting anyone’s radar hugely. (Although we at TAPS Support passionately believe that EVERYONE needs to know about it). It’s actually quite possible that you will be the first, and last case of TAPS your GP will ever see.

But this is not anything to be cocky about. (but you can be a wee bit smug 😉 ). The idea is to educate your doctor and give them the information so they can learn, and also where they can turn to for support. I suggest adding to your folder the following papers:

You’re going to be told your babies had TTTS A LOT. Technically, they did, but the long term effects of TAPS are different to good ol’ conventional TTTS. (We’re special, and we deserve to be treated this way 😉 I’m kidding.)

If I had money for every time I was told that it was TTTS outside of the LUMC, I’d be rich. I’ve even had people tell me to my face that the long term effects of TAPS are nothing to worry about and that the research group is too small. (Interesting, as not only are we part of that research group, it’s the largest group of TAPS twins in the world and let’s not get started on the fact there would be more cases if doctors would start screening for it 😉 ).

Be firm, be assertive, DON’T get aggressive or offended, and stand your ground. (Again, your folder is going to be handy, have the long term effects paper relevant to you printed out. You also should be receiving long-term follow-ups at ages 2, 5, and 8 to monitor for neurodevelopmental impairment and early intervention. (The papers I mentioned to print off will support this.)

The idea is to educate and get them onside 🙂

Tip 4. What to do with the information?

This is tricky. If you are getting long term followups, you’re probably going to get detailed reports. A flaw that I found is there is a lack of communication between departments and doctors. If it’s possible, authorize that your reports are automatically sent to your GP, your pediatrician, and anyone else with an interest.

These detailed reports are handy, but often the data can be overwhelming to your local team. Talk with your research team about suggestions on how to use it.

How to use it: this is tricky. I’m going to be honest, we used an approach of honesty and openness with everyone involved and it bit us in the butt a few times (this is another story.) Disclose what you are comfortable disclosing to schools, they’re usually appreciative but I’ve had some issues,

However, you still need to make sure that your kids are getting the regular followups every child gets for their age! Sometimes everyone assumes someone else is doing them, and then you end up like me where you realize at age 6 someone forgot to do some routine stuff like eye tests! From personal experience, we had 3 different teams working on our case, and no one really knew what they were supposed to do and everyone assumed everyone else was doing it.

Again, this is where your folder is going to be handy. Just keep track of everything and make sure you calmly bring up any missing pieces with your pediatrician or GP and go from there.

This is easier said than done! I just want to remind you all that you are awesome people and you can successfully advocate for your babies. Stay calm though, and help your team develop their knowledge on TAPS. Think of it like this – you’re helping another family in the future while you’re helping your own.

I’d love you to read this amazing interview we did with Dr. Lopriore last year about TAPS in our fast five – and take in what he says about parents reminding doctors that they have some work to do.

This is not an easy diagnosis. It’s hard. Bloody hard. I still go into every appointment ready for having to explain it all (yesterday I had to explain it to the optometrist!). The mental toll on you can be extreme. I really, really encourage you all to remember you are just as important, and you need to go and get help for yourself. Self-care is so vital as well.

Know when to fight, but also know when you’re at your limit.

You’ve got this. But if you need a friend or some guidance – get in touch with us or join our Facebook group.

We use cookies to ensure that we give you the best experience on our website. If you continue to use this site we will assume that you are happy with it.OkNoPrivacy policy