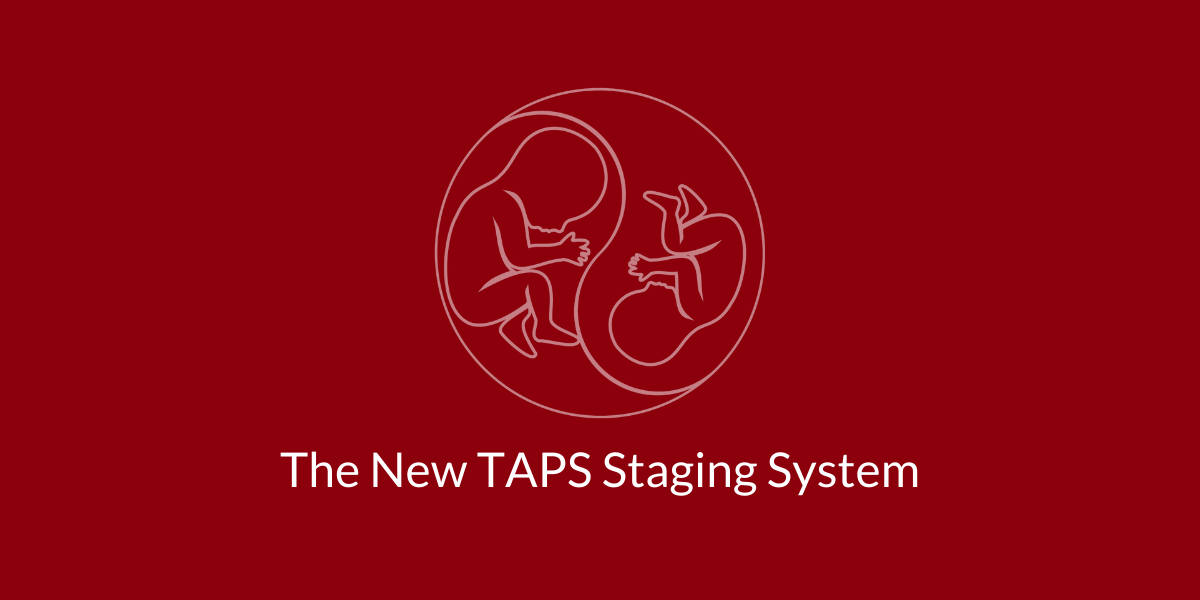 It’s time to talk TAPS staging systems! As you know, research into Twin Anemia Polycythemia Sequence (TAPS) is an evolving part of science and the medical world.  For a disease described only 15 years ago, we know more about it than ever, including things like the long-term effects, and international trials are working on finding the best treatment for it.  Of course, as we understand more about TAPS, the diagnosis and treatments become more refined. So let’s look at the (new) Leiden staging system for TAPS, and talk a little about why it’s here, and also a little about the history of it.

A Brief History Of TAPS Staging

We’ve covered a lot of this on our website, but today we want to go a little more in-depth into the history of TAPS staging in utero. Throughout the years, from the paper that described TAPS in the spontaneous form and named it, to even now – routine MCA dopplers have been described as essential in detecting and monitoring TAPS.  But how was the staging system developed?

From the very beginning, back in 2005, in the very first paper about post-laser TAPS, it was suggested that routine MCA dopplers become part of screening protocols for monochorionic twins.  It was recommended that an MoM of  <0.8 and >1.5 become the cutoffs for intervention.  (For more information on MCA Dopplers and MoM’s, read our previous blog)

Over the next five years, more and more research was done on this new disease, and researchers began to understand more.  It wasn’t until 2010, when a staging system was proposed for TAPS, that the values changed, and a broader spectrum was introduced.

This staging system, known as the Leiden Staging System, went as follows:

This was considered the standard right up until 2016, but of course, as we began to understand more about TAPS, there were ideas that the staging should evolve as well.

A 2015 paper suggested that delta MCA PSV values could have more accuracy, which began the evolution of the current staging system.

What’s Delta MCA-PSV got to do with it?

Before we go any further, let’s take a few minutes to explain what are the differences between MCA PSV cutoff values and delta MCA PSV.

In the Leiden Staging System, TAPS is diagnosed when the babies meet the cutoffs of 1 and 1.5 MoM or higher.  But something interesting happened – TAPS cases were being diagnosed that didn’t meet these criteria. Some babies who were born weren’t always breaking those cutoff values (a good example is an MoM of 0.9 and 1.4), yet after birth, their blood tests and placenta confirmed they had TAPS.

What was found is that by subtracting the donor’s MoM from the recipient’s MoM, and if that number was 0.5 or greater (this is the delta part!), then this was a much more accurate representation of whether TAPS was present.  So, in other words, delta MCA PSV is just the difference between the recipient’s and the donor’s MoM.

As always, research showed that this theory had a lot of merits.  A lot of time went into researching this, and in 2019 a new staging system was proposed.  It didn’t vary too far from the Leiden Staging System, in that it was still five stages, with stages 3-5 remaining the same.  However, the critical difference was that stages 1 and 2 changed.

But what we also know now is that there are other signs of TAPS that can be seen on ultrasound in utero.  These markers are things like a “starry sky” liver in the recipient, or the donor twin’s half of the placenta looking brighter (echogenic), or an enlarged heart in the donor (cardiomegaly).  These shouldn’t replace MCA dopplers but should be used to reinforce a suspected TAPS diagnosis. It’s also important to remember that most cases will show at least one of these signs, these are often in later stages of TAPS, and at least 14% of patients will have nothing more than a difference in their MCA dopplers.  That’s why it’s so important to have those routine MCA dopplers.

This revised staging system is slowly being introduced across the world. It’s important to remember that if your doctor is still using the older system, it’s ok. Make sure they’re checking those MCA dopplers, looking for the other signs of TAPS. As always, advocate for the proper testing before birth and after birth ensure they do blood counts with reticulocytes and hemoglobin, and check that placenta for small connections.

TAPS research is continuously evolving, and in 15 years, we’ve learned so much about this new disease.  Will the staging system change again? Probably.  As we understand more and more about the condition, it will become more accurate and may include some of those additional signs of TAPS we just talked about.  What’s important to remember, though, is that you need those routine MCA dopplers, as TAPS can have devastating lifelong consequences.

If you have questions about the new TAPS staging system or want to talk about your TAPS diagnosis, why not join our Facebook group?  Our community is about sharing knowledge and stories and bringing the latest evidence-based news directly to you.  Find us here.

The TAPS Support Foundation is grateful to Dr. Femke Slaghekke and Dr. Lisanne Tollenaar for the time they spent fact-checking this article for us. We’re dedicated to bringing you up-to-date, factual information and without their help, we couldn’t do this!