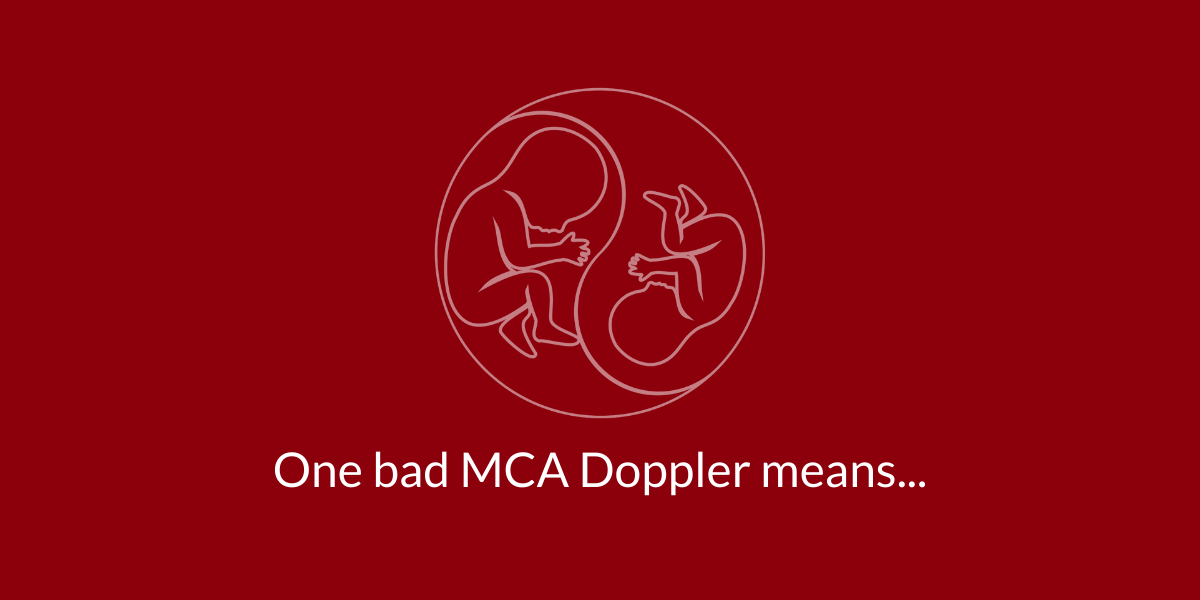 The team here admit to one thing – we’re so passionate about getting MCA dopplers done that we push and push and push information at you, and tell you you MUST get them done.  We give you the tools to advocate and help you with wording and help bust those myths about TAPS screening.  And then, all of a sudden, you get one bad MCA doppler, and everything seems so dramatic.

Except, it’s not. Let’s take the chance in this blog post to talk about MCA dopplers, why they’re essential in TAPS screening, but also what influences them, and why one bad reading isn’t always something to panic about.

The first thing to talk about is all the terminology used with this type of doppler, and also what exactly does it do?

MCA stands for Middle Cerebral Artery. From that name, if you’ve guessed it’s located in the brain, you’re absolutely correct. It’s one of the major arteries in the brain that supplies blood to the cerebrum (the largest part of the brain.) Learning, memory, communication, hearing – all these are processed in the cerebrum – so the blood flow affects the health of a baby’s brain, making it critical as it develops. With the recent discoveries about the long term effects of spontaneous TAPS, you can see why we’re so passionate about making sure this testing is done.

The MCA doppler is a non-invasive test used to measure the speed blood is going through that artery.  On a regular ultrasound, this isn’t possible, as it uses sound waves to produce images, but with a doppler ultrasound, it bounces a higher-frequence sound wave off the red blood cells to show the blood flow.  If you’ve gotten to this point and are thinking – this sounds like the same principle as police speed cameras –you’re right.  The faster the sound waves bounce back, the faster the blood is moving.

This reading is measured in centimeters per second and converted to an “MoM” (Multiple of the Median). This is just a fancy way of saying where you sit with the average for your stage of pregnancy.  The average is always 1, and for twins, you want both twins to be sitting right around that 1, with minimal gap between them.  Curious? You can look at this tool, which can help you see how the reading is converted.

We have a saying here in the TAPS Support network – “One bad MCA doppler means only one thing – time for a recheck in a few days.”  Seriously!  We never panic over the first one because there are so many factors that can influence the readings.

First of all, what makes it a bad reading? Let’s go back to the speed camera analogy to explain a bit further how things can go wrong.

A speed camera has to be angled as close as straight on to the car to get the most accurate reading of how fast it’s going.  This way, the sound waves go straight to the vehicle and bounce straight back—the better the angle, the better the accuracy.  If the angle is incorrect, your reading can be off, and that’s why you can argue your way out of a speeding ticket if it isn’t accurate!

The same thing happens with MCA dopplers.  If they don’t hit the right angle or the ultrasound wand is pushed too hard – it can also put the readings off.  So while it’s not a speeding car, a couple of wriggly babies in awkward positions can throw things off.

TAPS isn’t all about having just one bad MCA doppler reading. It’s really about looking for patterns where the doppler readings for both babies are moving apart.  It’s identifying this trend and choosing the appropriate plan of action.

Of course, your doctors must also be looking for other indicators of anemia, like cardiomegaly (an enlarged heart in the donor), ascites ( fluid in the belly), hydrops (fluid buildup in the organs or under the skin), a bright placenta on the donor side, or a starry sky liver on the recipient for polycythemia.  If these are seen, you may need urgent treatment for TAPS.

So what do we suggest?

If you’re getting routine MCA dopplers, and this is the first time you’ve had a bad MCA doppler reading, and there are no additional signs of anemia or polycythemia – don’t panic. Advocate that your dopplers are rechecked within a 48-72 hour time frame to establish if this was a case of a faulty speed trap or whether it’s an emerging trend.  Remember, just like you can challenge the accuracy of the speed camera and avoid a fine, you can also answer questions about the accuracy of the doppler measurement by rechecking in a few days.

Hopefully, now we’ve helped you understand why we don’t panic over that first bad MCA doppler reading and give you some insight into how they work.  Next in the series is an article on the TAPS staging system and how the new staging system works.

The TAPS Support Foundation is grateful to the following people who helped with both information, and fact-checking in this article. We would never have been able to write this without Dr Femke Slaghekke, Dr Lisanne Tollenaar or Janessa Baddely. Thank you for taking the time to make sure our information is factual!