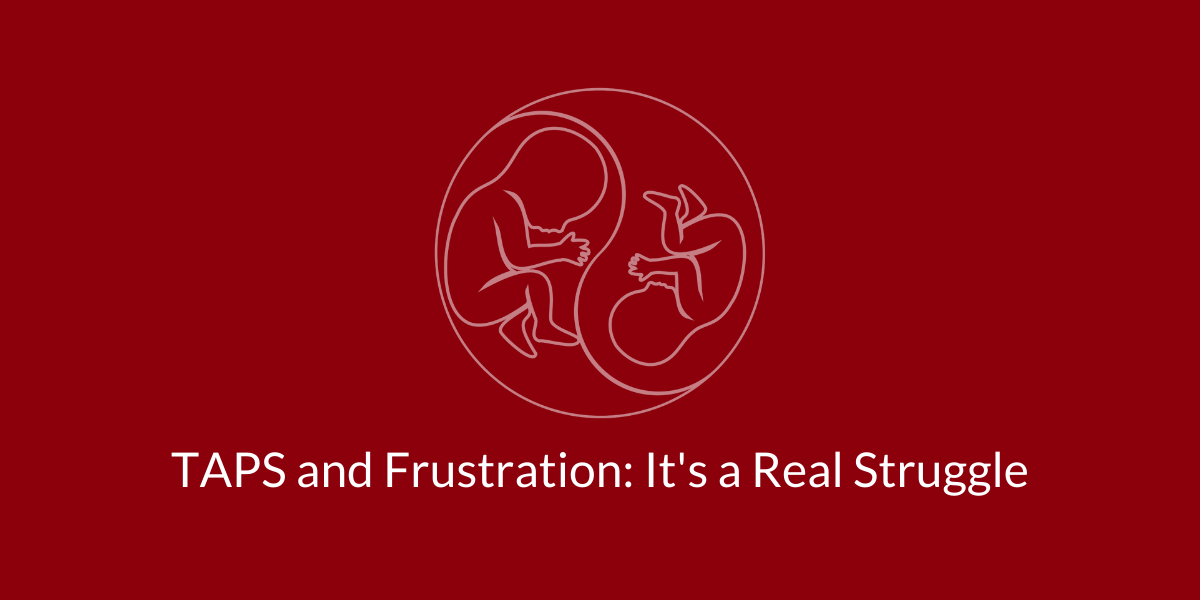 TAPS causes so much frustration. This blog is about living with this fact.

I’ve talked about our story so many times, and I’m pretty sure most of you can recite it by heart. Born at 31 weeks with Twin Anemia Polycythemia Sequence (TAPS) in 2013, one of the best ways to raise awareness is to talk about our story on repeat.  It’s guaranteed you’ll either get annoyed by me or want to join my campaign ;).

The repetition is a strategy – if you hear me talk about it, maybe one day, you’ll know someone having monochorionic twins. You’ll ask them if they’re getting routine MCA Dopplers and all the checks that we talk about in the various advocacy items I do. I’m so passionate about this. I run a Facebook group, an advocacy website, and started a foundation to make sure no one ever feels alone in their diagnosis hopefully.

One of the most frustrating parts has been after the girls were born, though.  You see, TAPS is such a new disease, and so little has been known about it, that often as TAPS parents, we feel like we’re dismissed as overprotective and paranoid.  Your kids survived! They’re healthy! It’s just TTTS, and they’re doing great.

Because TAPS is so new, there’s still schools of thought out there who think it’s still not essential to screen for.  They also tend to lump it with twin-to-twin transfusion syndrome (TTTS) and say that the research out there on long term effects is minimal, the control groups too small, and that the problems are related to prematurity rather than the disease itself.

(Never mind the paradox here that if TAPS was part of routine screening, control groups could be much more extensive and data would be easier to obtain!)

But what effect does this have on parents who are already dealing with the aftermath of a traumatic pregnancy and birth, possibly even an extended NICU stay?  Parents who are already struggling with the fact their babies have been born with this disease we don’t know a lot about?  The impact it has on our mental health is enormous,  and often the frustration we feel is swept under the rug by family and professionals because “They’re here, and they’re safe.”

We’ve talked about the long term effects in other blogs, and this 2020 paper also is pretty damning for spontaneous TAPS families. I’ll be honest here, on a personal level, this paper was devastating.  Over the past six years, the nervous anticipation of not knowing, and then finally understanding what the potential was a slap in the face. I cried for days, and then the reality started to hurt.

It became consuming – and every small thing that my girls did became almost an obsession with finding out if this was part of the more significant long term effects.  When I raised these with medical professionals, I was often dismissed.  Even with the data in front of me, it was still written off to other things.  It was so frustrating, and of course, I took it personally.

When it’s implied that you’re just another paranoid mommy and that you’re overthinking things, it’s upsetting, it’s infuriating, and it can only be taken personally. Your self-esteem takes a beating, and you begin to doubt your senses. I’d already been living with a level of uncertainty for the past six years, and now to have trusted professionals telling me it was potentially all in my head and I was overthinking things – it’s a real kick in the groin. I was advocating for my children; I had proof in the research in front of me, and yet I was still being told that not only TAPS wasn’t different from TTTS, but that things were just fine.

This began a whole new storm of advocating for care and help for my girls. The toll of this is exhausting.  The feeling that no one believed me even when I had evidence to support my concerns became overwhelming.  My mood was affected, my self-esteem shattered. All the time, this continual “They’re here, there’s nothing to worry about” rhetoric was driving me to the point of frustration.

Back in January, I took action.

I sat down one night, and I poured all my frustration into an email which I sent to a local care provider who I’d been dealing with.  In this letter, I outlined my frustrations. I sent research and data to support my concerns and sketched the level of care that I wanted to receive.  This letter contained all the frustrations of a mom who had just had enough with being told, “They’re here, and they’re safe” and feeling dismissed.

I pointed out the differences between TAPS and TTTS, emphasizing facts like my child had been in speech therapy for two years and had never had a hearing test. This was despite the research supporting that there was a strong possibility she could have a hearing problem.  I asked for things like eye testing – another crucial point that had been missed along the line.  I even asked for help with behavioral issues and attention problems. All the time I felt this level of frustration and anger and disappointment in everything.  As I wrote, I felt the frustrations of almost seven years pour into a letter that wasn’t aimed at anyone in particular. It was aimed at a system that needed updating and awareness of a new rare disease.

I’m pleased to report that despite the best efforts of a  global pandemic, things finally kicked into motion. I’m still angry, tired, frustrated, and ready to take on the next TAPS denialist, but I’m beginning to see positive action in our case.

What is the point of me airing my dirty laundry? Why these rants about the inadequacies of care in our case? It’s simple.

If you are a professional who has the privilege of meeting a family of TAPS twins, listen to them. Discuss concerns with parents, check their medical history, and ensure that all the necessary, routine testing is done.  Often there is more than one interested party in our cases, so things are often overlapped, and more often missed.  Acknowledge their concerns, discuss them, and take action if it’s necessary.  Please don’t tell us that it’s the same as TTTS and that now they’re here, they’re going to be okay.  We bring you our concerns as we want someone to listen to us and help us take the right action.

But also, check-in on how we are doing. We’ve had a stressful time, living with a lot of uncertainty and still living with many unknowns. Mental health is often pushed aside as we prioritize our children’s care. Sometimes we don’t talk about ourselves and where we are.

Families and friends of TAPS parents, talk with them about their journeys, and acknowledge the uncertainties.  But most importantly, ask how we’re doing. Even though you think it’s the right thing, please stop telling us not to worry. Things aren’t all over now they’re born.  Instead, please support us in our concerns. Listen to our worries, and help us by validating our fears, but also keeping us in check.  And ask us how we’re doing.  Again, we put the kids first and often forget about us.

And finally, to my amazing, resilient, frustrated, angry, and yet passionate TAPS families.  Keep advocating. Share your stories. Keep breaking down the walls.  You are unique for everything you have been through, yet you still keep fighting for your children.

Remember to take a break from the battle on occasion.  Realize that your mental health needs care too and that you are just as important as your kids. Put down the battle-ax at times, rest, and take a day off from this ongoing fight.  You are doing a fantastic job.  Just remember to make yourself a priority as well.

#TAPSisReal.  But together, we can raise awareness and make changes. After all, it takes a village …

Be kind, and take care of your mental health.