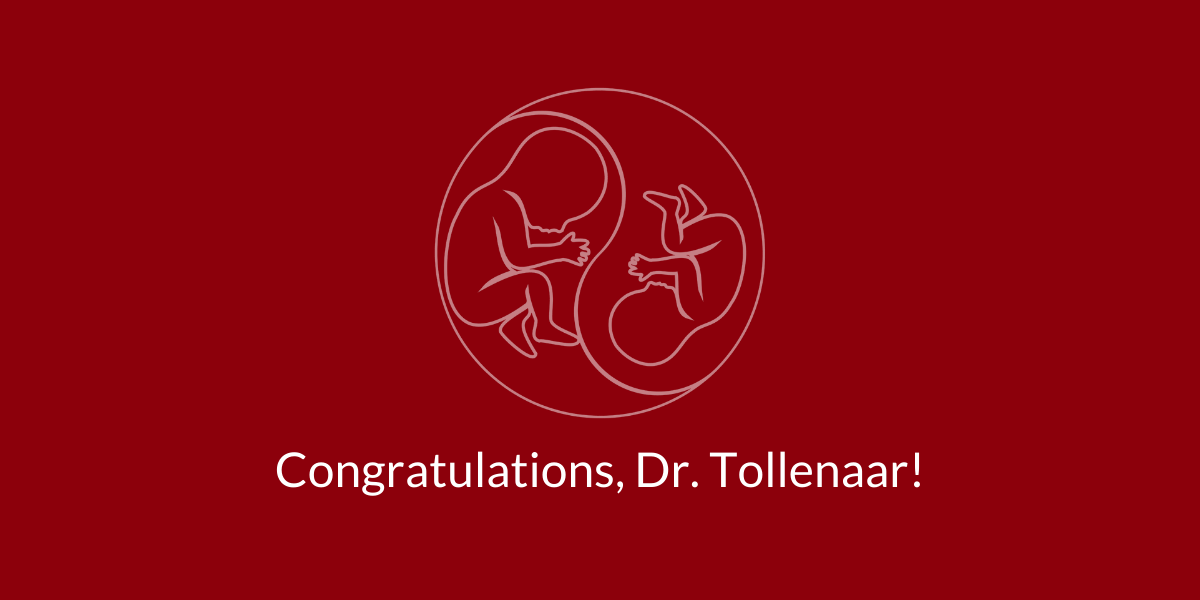 I had the privilege of being invited to the promotion and Ph.D. Defense of up-and-coming TAPS researcher, Dr. Lisanne Tollenaar this month. Here’s how the day shaped up.

One of the more interesting parts about the TAPS Support Foundation is that we get to see the other side of not only research, but we get to talk to emerging researchers and also learn the latest news on what has been discovered about TAPS. Even though it was discovered 15 years ago, and we know more than ever about it, there is still so much that we don’t know, and we continue to learn more.

In the past few years, there have been many breakthroughs about improving the antenatal TAPS staging system, and also about the long term effects of spontaneous TAPS – and all these can be traced back to the newly minted Ph.D. – Dr. Lisanne Tollenaar.

The 10th of September was an amazing day. Dr. Tollenaar’s PhD defense had been moved from April due to COVID-19, so it was interesting to see the changes from previous defenses I’d attended.

The morning started with a “Layman’s Talk”, where Dr. Tollenaar talked about the research she had done, and really explained the different findings, and about TAPS in general (hint, if you’re a member of our Facebook Group, stay tuned. We may have some exciting things to share soon! 😉 ) There were around 75 people attending – and it was all done online, making it accessible for many people across the country, and even some international observers.

The afternoon saw the defense take place, and it was interesting to see Dr. Tollenaar discuss her research, and answer probing questions (once again, online!) from experts across Europe. After a brief discussion, her Ph.D. was awarded and then it was time to celebrate!

(I should add here, at this point in time I was travelling on the train from my house to the celebration, as it was a closed defense (but streamed online). Technology is AMAZING).

And After The Official Stuff

I got to catch up with Dr. Tollenaar later in the day, and also received a copy of her TAPS focused thesis – this is a book that contains all the research that had been discussed and explained in the earlier two sessions. It’s also an amazing resource that we can use here within our foundation as it’s full of the latest research.

It was also great to catch up with our patron, Dr Lopriore and our research advisor, Dr Slaghekke and discuss some exciting projects that are coming up, as well as some messages to send back to our Facebook group.

One thing that was also great was to talk again with Dr Oepkes! I think though the most amazing part was catching up and meeting Max and Daan – and their amazing parents who generously shared their story in the beginning of the thesis as a case study. Their story really captured my interest, particularly as we shared many similar struggles with long term followup care. One of the most interesting parts was that before birth, they were diagnosed with SIUGR, however it wasn’t until after birth that it was discovered they had taps – highlighting again the importance of MCA dopplers, and also the research Dr. Tollenaar had done into the revised staging system for TAPS.

Watch our Fast Five Questions on the TAPS Support Website soon – as we’ve got an exclusive with Dr Tollenaar coming up!

PS. It was an amazing day, but it’s always a great reminder of why we’re here when you can come home to this amazing greeting. TAPS is so real to so many people, and I’m grateful for research.