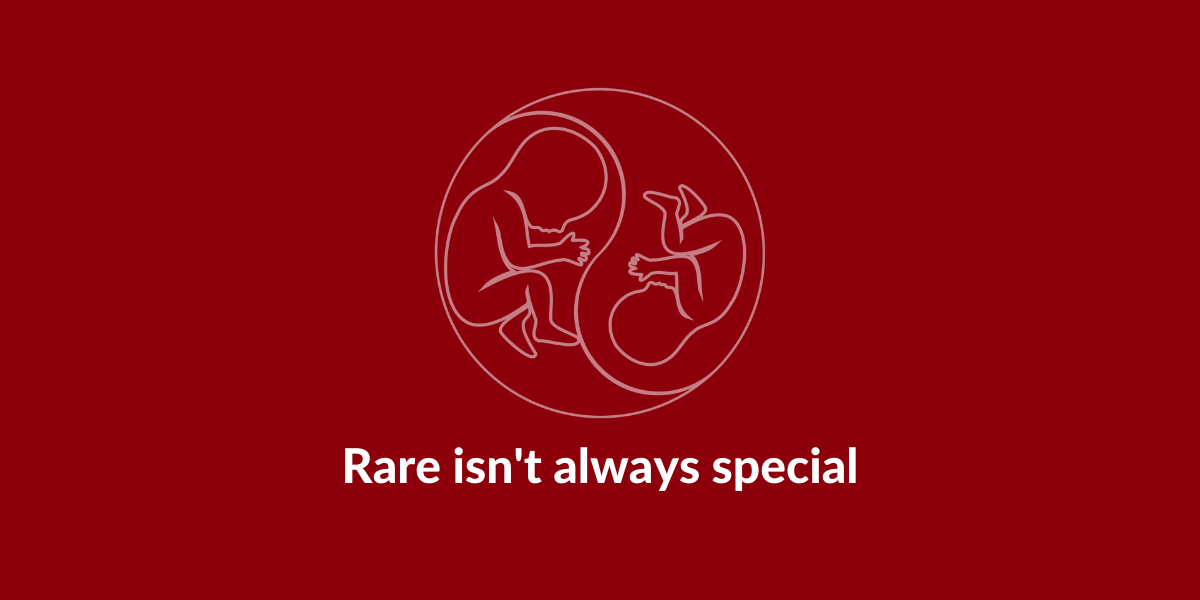 One of the things about TAPS that is always thrown around is how rare it is.  (It’s one of the tired myths as well – why should we screen for it because it’s so rare? ) .  There’s so little common understanding about it, and even in the medical field we’re met with the argument “Oh, you had TTTS?”

As families, we often fight for screening, fight for treatment, and then fight for followup care just because … well, TAPS is rare.

We talk in our group about the impact TAPS has had on our lives. A lot of our members have talked about how lonely and vulnerable they’ve felt in their journeys. With mental health already a huge issue in multiple pregnancies, the extra stress of a TAPS diagnosis can really be devastating.

Rare can be isolating

Because TAPS is an “invisible” disease, meaning that we don’t necessarily have physical signs when we’re pregnant, a lot of the time it’s difficult to explain the emotions you’re feeling.

Even after birth, we often feel isolated because whilst our babies are premature, you can’t see or guess what is going to happen in the future.  This can be frustrating, as we often can’t explain why we feel so emotional, and isolating because you don’t know anyone who can relate to exactly how you’re feeling.

“The 2-week window after our diagnosis and before I went inpatient for constant monitoring, I tried to explain to many people what we were going through. A large portion of these people said I was being overly paranoid and they knew several moms who gave birth to twins (most likely fraternal) who never had any of these issues. That I was probably making it worse by worrying.” – Bethany

“It isn’t a disease that anyone sees. We as mothers don’t look sick. Our babies are typically preemies, but otherwise, to the layperson, seem just fine, so it’s hard for someone to relate to the angst risks taken and angsts involved in getting these babies to where they are today. It’s definitely a case where you can feel very isolated because very few understand the severity of what you are going through/have been through.” – Florrie

“I thought I was the only person in the world who ever had twins who interchanged blood resulting in one looking like a beautiful red rosebud and the other one like a skinned rabbit. I could not believe they told me they were identical as they definitely looked very different. I was just very lucky they decided (through circumstances) to come spontaneously into the world at 32 weeks.” – Siegrid

Rare can be devastating.

When we talk about our stories, there can often be mixed reactions. Some people don’t realize how serious the situation was, and the uncertainty we face when it comes to long term effects.

“I’m in the USA, and when I share things on my personal Facebook page about TAPS and even TTTS (as I know other moms who lost children due to that) I would get questions like what is TAPS, so I give the full name of it and then post a picture I have saved from Google that tells what it is exactly. Then go into brief detail about how it affected our story. Most of the time people aren’t fully prepared to handle so much, even if I sugar-coat my story to them. I always get “OMG I am so sorry, or, oh goodness how awful I had no idea”. And then the ghosts me for a bit.”- Helen

We’re often left feeling alone, and struggling with the reality of our situations.  Some of our members talk about losing friends, feeling lost and lonely because they don’t know how to talk with people about what they’re going through.

Rare can be confronting.

“The hardest part about it being rare is there isn’t any standard protocol for the treatment…I remember my MFM saying she wished it were TTTS because then they’d know to do laser, but because it was spontaneous TAPS there wasn’t a clear option for treatment. After our own research, we determined laser was the best option and traveled to Baltimore from Tampa for the procedure, as that was not given to us as an option.” – Florrie

“I was lucky to have the specialist who sent us to the MFM, send us because he suspected TAPS but wasn’t sure at that point. No other doctor other than my MFM who did surgery and treated us, knew what it was. Most people in my life don’t know the difference between fraternal/identical.” – Chelsea

We’re often put into difficult decisions where you have to make literally a life or death decision.  It isn’t made easier when there is a lack of knowledge about TAPS out there, and this is also in the medical community.  We have to fight for screening, fight for treatment, and finally fight for recognition for this disease.

We have to put on a brave face, but often inside we’re crumbling under the stress and strain.

Rare can be frustrating.

When we leave the hospital with our babies, it doesn’t end there. There are years of tests and follow-ups that have to be done, because of the long term effects of TAPS. Because TAPS is rare, we sometimes have to teach doctors and professionals about it.

“I get “Oh, they are looking so good! They survived so they are good, you need to not worry” No… they are surviving. And having everyone brush off your concerns, especially after a whole pregnancy of it, is especially overwhelming.” – Tabitha

”The constant monitoring for years to come for developmental delays is totally overwhelming. Everyone thinks everything is fine because we’re home from the NICU and they’re seemingly healthy girls. No one understands that the journey doesn’t end with coming home. It’s kind of just beginning.” – Bethany

“The line “But they’re alive, so why are you still dwelling on this?” Because for 6 years we have lived with an incredible amount of gratitude, but also fear for the unknown. As we understand more about the disease, we wonder what else is coming.” – Stephanie

Across languages, countries, cultures – one thing has united us.  TAPS has made an impact on all of us, but it brought us together.  We’re one large, slightly weird family united by red and white twins.

“I have never (and mine are now 45) had come across anyone with the same experience. Finally, I did not feel isolated and it had a name as well. “ Siegrid

“I am so very sorry for what everyone faces with this, but it is so good to not feel so alone in this experience and these feelings.” – Tabitha

Rare doesn’t mean you’re alone in your diagnosis.  Rare means you’re now part of the TAPS family, and we’re here for you.