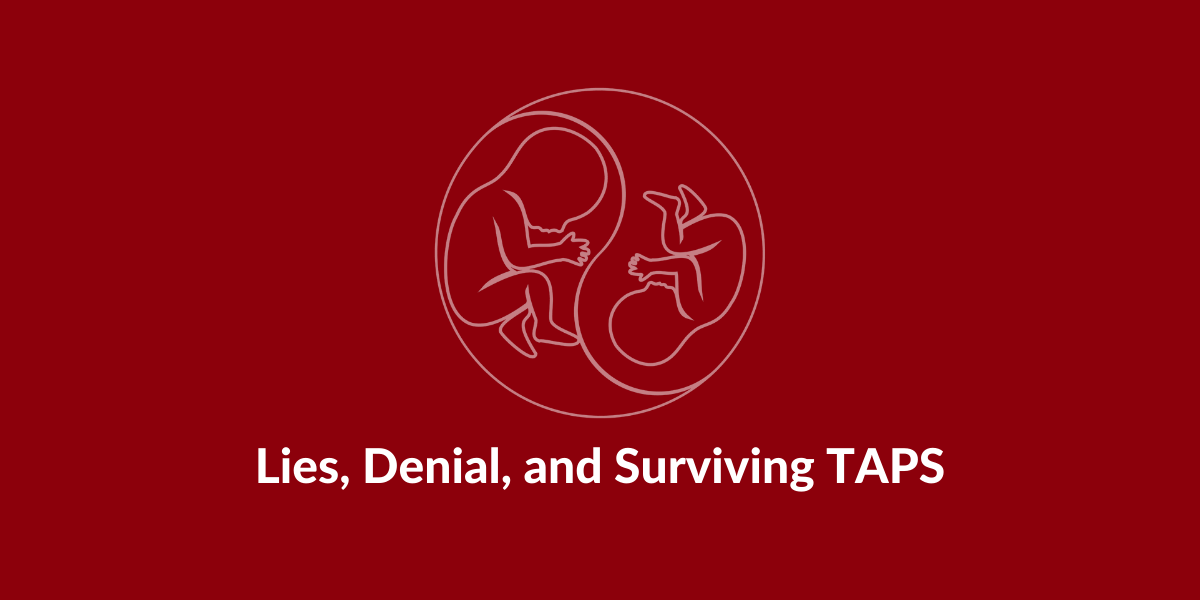 In a change, we’re talking with one of our group members about her story. You might remember this shocking post we had on our social media, where she shared the horrifying fact she had been told lies throughout her pregnancy about MCA dopplers, and how her sons were born with TAPS.

She generously shares her story in this latest blog post, in the hope that no one goes through what she did. We’ve kept identifying details out of this story due to the nature of it.

My husband, I live with our three kids (our two 1/2-year-old daughter and twin 7-month-old boys) in the Midwest of the USA. We recently moved across the country and bought a house we are renovating, so with that, and 7-month old twins and a toddler-life is quite an adventure!

Tell us about your story. What happened when you were told you were having twins? What was your reaction?

We were told at our first ultrasound at 11 1/2 weeks by our tech that we were having twins, and she was pretty sure they were boy/girl. She couldn’t find the membrane for a while but then said they were Di/Di since they were different sexes. I ran to google and was relieved that we weren’t Mo/Di as the risks were much less!

At 14 weeks, we found out they were both boys, but we were still under the impression they were Di/Di. It wasn’t until an ER trip for bleeding at 17 weeks that we found out that I had complete placenta previa, and in fact, had only one placenta.

I was still super confused since we were given different information, and I wasn’t able to see my OB until 18 1/2 weeks, and truly didn’t know how serious Mo/Di twins were.

Thank goodness an incredible Mo/Di twin mama brought me some things for the boys and suggested I join a particular Facebook page-just in case they were Mo/Di. I would have been 100% lost without that group. There was SO much information, and it became my go-to.

My OB, despite being a high-risk doctor, was extremely flippant about the situation and brushed away most of my questions. Her view was all twins are the same, and the goal was to stay pregnant as long as possible. If it weren’t for Facebook and lots of googling, I would have been extremely uneducated

What happened when you found out about MCA dopplers? Did you have to ask for them? What were you told about them?

I learned about MCA dopplers from our wonderful Facebook group! When I had my first MFM appointment finally at 19 1/2 weeks- I tentatively brought them up, knowing so many women had bad experiences. I was told that they would be done. It was standard care. I was so relieved and trusted my MFM completely-something I would come to regret.

My OB never discussed any of my results and never read the MFM reports before we saw each other. My MFM would tell me each appointment that the dopplers looked good-i never thought to ask for more specific numbers. This should have raised red flags, and while I was uncomfortable with the situation-I didn’t have any other options.

It was another hour’s drive to the next doctors’ offices; none were taking high-risk patients that late in pregnancy, and with my previa, it wasn’t safe to be in the car that much.

How was your care during your pregnancy?

My prenatal care was extremely lacking. We lived in an area with extremely limited healthcare options, and appointments were hard to get, and I usually waited an hour to 3 hours past my appt to be seen. Then each appointment would be very rushed.
With my OB, I was constantly battling to get a c-section date scheduled before the 36+6 mark recommended for Mo/Di twins to reduce stillbirth risk (she felt they could be delivered as late as 39 weeks).

When I lost my mucus plug at 32 weeks, I pushed for steroid shots just in case it was a labor indication and was told firmly they wouldn’t be needed. My MFM would seem rushed but always told me everything looked great, and each week I would ask specifically about dopplers, and he would say they were fine.

I had this gut feeling something was wrong, but I attributed a lot to my fears over the previa and just a generally difficult pregnancy with risks

Tell us what happened with their birth.

My boys’ birth was not at all what I expected or planned when they came at 33+5!

Two days before the birth, I had an MFM appt and was told that my complete previa had miraculously cleared and that the boys looked great-great weights, and of course, their dopplers were perfect.

Thursday morning, I had some bleeding, and my doctor suggested going to the hospital for a check that evening. When we arrived, we found out I was already dilated 5 cm and having regular contractions (that I was starting to feel). I was given magnesium, a steroid shot, and told I would be in the hospital until the boys arrived.

I started to feel my contractions over the next few hours but thought that it was just discomfort from the magnesium. Then I felt like I needed to push. My nurse left the room to get me a little something for the pain and to consult with the doctor. While she was out of the room, our son George was born.

Then all of a sudden, it felt like everyone in the hospital was in the room. I knew vaginal births were extremely risky with Mo/Di twins. I also knew our son Simon was breech. I felt a bit panicked. Our son Simon was born 2 minutes after his brother, breech, and still in his amniotic sac. The NICU team attended to George and got Simon breathing in the room, and then took them straight to NICU.

As for the TAPS diagnosis – I was able to see George for a few seconds and saw Simon from a distance. George was so white and pale, Simon was so incredibly red. At that moment, I can’t explain how I knew. I just did.

While a slight color difference is common in twins and not always an indication of TAPS or really anything serious, this wasn’t slight, and I just had this sense that our boys had TAPS. My husband asked the NICU doctor if he had a few minutes if he could come to discuss the boys’ status with us when he had a moment. He came to my recovery room a few hours later and explained the boys’ TAPS diagnosis and went over the current treatment approach.

While our prenatal care was so lacking, I thank God every day for the NICU team he blessed us with. They were top-notch and so responsive to our questions and concerns.

I was also able to go back to Facebook and message someone who was able to walk me through what to expect and what to ask. She also brought me into a wonderful virtual support community that I would have been lost without and continues to help me make sure I am the best advocate I can be for my children

This wasn’t a journey I was prepared for, or that one can be prepared for. Having children with a rare condition can often feel like an uphill battle.

While I was pregnant, I constantly felt crazy asking for necessary tests. After birth, it just felt like a crazy whirlwind. I am so incredibly grateful to the parents and experts who have walked this path before me and those who have brought attention to TAPS.
Especially by making it easy to understand through blog posts and videos. When our boys were born, my husband, parents, and I were reading technical, medical papers-trying to understand as much as possible.

I am still in awe that my boys are here; that they survived this. We know there are still many unknowns ahead, but we feel confident that we have the knowledge and support to keep tackling this. My heart hurts for the parents that have lost one or both of their babies to TAPS, and our prayer is that one day, no parent will face loss due to TAPS. You need to trust your instincts.

You are strong and smart, and your voice deserves to be heard.