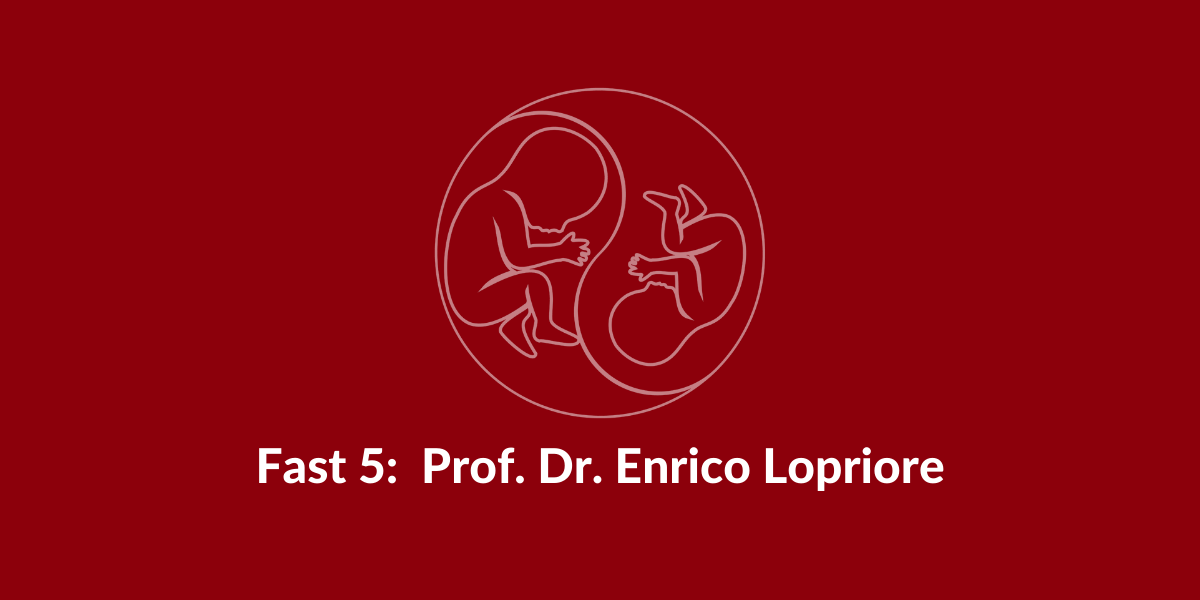 Welcome to a new series of blog posts by TAPS Support. Our team is passionately following research, but we felt it was time to dive deeper into the stories of the people behind Twin Anaemia Polycythemia Sequence. It’s time to introduce the TAPS Support Fast Five, and this week we’re introducing Prof. Dr. Enrico Lopriore.

Dr. Lopriore is no stranger to anyone in the TAPS world, but we were so excited when he decided to answer our Fast Five questions.

Head of Neonatology in Leiden, the Netherlands, and originally from Italy, twins are his specialty.

Dr. Lopriore also wrote the first paper describing spontaneous TAPS way back in 2006, so for the TAPS Support Team, this is a special interview.

Dr Lopriore is pictured with one of our founders, Stephanie.

Dr. Lopriore, thank you for your time! Half of our team have fan-girl moments, and the other half are making funny jokes about placentas – we’re excited to have you with us.

We’d love to know a little more about you.

I am an Italian neonatologist and head of the neonatology department in Leiden, the Netherlands. I have always been passionate about twin research (for more than 20 years now) and did my Ph.D. on twin-twin transfusion syndrome (TTTS) in 2006. My passion for twins is maybe because I am also a twin, and I think that twins are fascinating and wonderful.

However, as a neonatologist, I also see the downside of twinning, as many of them are born preterm and need admission to our intensive care unit. The worries and anxious moments parents go through in those stressful weeks is what truly motivates me to try and improve the care and outcome for these twins (and help their parents). That’s also why I am very proud that our new intensive care department has four twin rooms specifically dedicated to twins, and the logo of our unit consists of the faces of two happy babies.

Why are you so passionate about researching TAPS?

When I was a medical student, I thought that all diseases had already been “discovered” and that everything written in medical textbooks was true.
That’s why I was very surprised when we first started seeing these strange “red and white” twins at birth, now almost 15 years ago. Nobody had a good explanation at that time.

People used to say that these twins had acute TTTS during labor. But when we injected the placenta with color dye and discovered that they had only tiny anastomoses, we knew this could not be an acute shift of blood from one twin to the other during labor (because that’s physically impossible through such a tiny vessel).

We then discovered that the anemic donor had extremely high reticulocyte count at birth, confirming that the cause had to be a chronic one resulting from the slow transfer of blood through the tiny anastomoses.

The pieces of the puzzle started to come together, and we started to gradually understand that we were now looking at a new disease. However, it took us many years to convince gynecologists in the Netherlands and throughout the world that this was truly a new disease and that we should worry about and try to improve the detection and management.

I know that doctors (in general) can be quite stubborn and are only convinced by facts. That’s why we went on passionately researching and gathering every piece of information we could gather about TAPS.

We started from the beginning, by investigating the placentas to understand the pathophysiology (a fancy word meaning the origin of a disease) and trying to figure out if it was truly possible to these tiny anastomoses could cause such huge differences in hemoglobin.

When we first were able to calculate the blood flow through one of these tiny anastomoses and realized we were absolutely on the right track, it was like a “Eureka” moment. But we were only at the beginning. We knew that there was a lot more to do because, again, this was a new disease.

We had to start from scratch and investigate the best way to reach the diagnosis, determine the antenatal and postnatal criteria, study the short and long-term consequences, and now we are also performing the first randomized trial to determine the best treatment.

We are not there yet, not by far, and there is still a lot of work to do to improve our knowledge and the management and outcome in TAPS twins.

We will keep on researching TAPS, together with our dedicated team of obstetricians, neonatologists, psychologists, and especially young Ph.D. students. They are the future and the backbone of our research team. We initiated this research project, but we need them to carry on this work afterward.

And of course, we have to collaborate with other international centers because TAPS is a rare disease, and the management and outcome will be improved by joining forces.
We also need help from parent organizations and work together with people like the TAPS Support group to create more awareness and spread to the word.

What’s the most important thing you want to share about TAPS?

TAPS is a new disease, and we are gradually discovering that it can have devastating consequences, short term as well as long term and long-lasting consequences. We now know that 1 in 8 donors have deafness. It is, therefore, important to screen for hearing problems because early detection can prevent delay in speech development and avoid that deafness also leads to isolation.

What’s your advice for patients diagnosed with TAPS?

TAPS twins, just like any twins, are great! It’s wonderful to have a twin brother or sister (and I can tell you from personal experience it has a lot of advantages too).

However, as I explained before, if TAPS develops and becomes severe, then you need help! I hope that your doctors are aware of the implications and consequences of TAPS.

If not, inform them (most necessary information can nowadays be found easily on the internet– editor’s note – or TAPS Support can help you find it!) and make sure you get the best possible treatment. It’s your right.

But also be aware that we still don’t know many things about TAPS.

Most importantly, we still don’t know what the best treatment is. We (as doctors) should not jump to conclusions and assume that we already know everything. You (as parents) should remind us that we still have quite some work to do!

That’s very very important! It’s crucial! If we don’t screen for TAPS, we will not detect it and then it’s maybe too late.

Dr. Lopriore, thank you again for your time, and we’re so grateful for what you do for TAPS. We hope everyone who reads this interview takes away some of your passion for TAPS!

Stay tuned for the next installment of the TAPS Support Fast Five. Soon we’ll talk to another researcher about TAPS, research and everything in between.