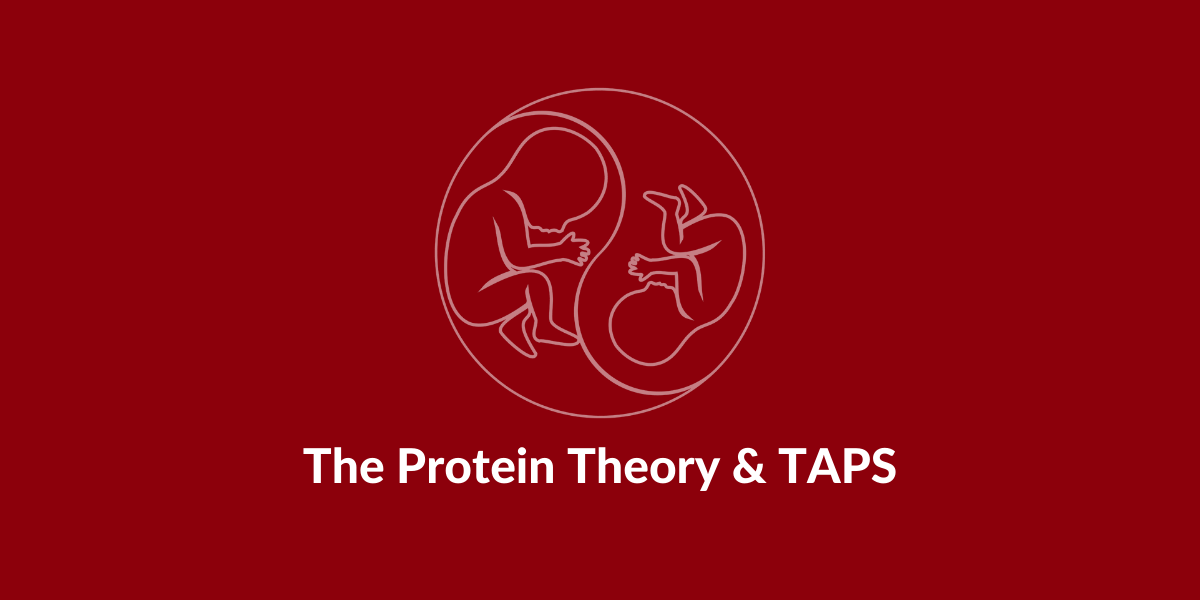 We’ve all asked this question: What do protein and nutrition have to do with twins, TTTS and TAPS? In this series, we’re going to explore healthy eating and some of the facts about nutrition in twin pregnancy.

In this blog, we’re going to cover some of the more commonly heard things about protein intake when you’re pregnant with twins. We’ll look at some of the science behind it and help you understand the evidence.

The aim is to help you understand where some of the claims about protein in twin pregnancy come from and how you can use the evidence to be proactive.

Nutrition in a twin pregnancy

Typing “nutrition twin pregnancy” into PubMed yields 347 results. When you refine this down to human pregnancy, this list almost halves.

There are many guidelines and rules about what to eat during twin pregnancy: some based on evidence, some based on hearsay. Some academic papers give answers that aren’t concrete but seem to show a positive effect between diet and twin pregnancy outcomes. What we’re aiming to do with this article is share with you what’s actually known about protein and multiple pregnancies.

Protein and Nutrition + TTTS (or TAPS)

We’ve all heard it. “To prevent TTTS, you should eat a lot of protein!” (This is actually factually incorrect – we’re about to explain why)

But where does this advice come from?

Well, it all started with a study back in 2000, published by Dr. Julian DeLia. (You might also know of him as the pioneer of TTTS laser surgery!). The study was conducted over a 10 year period (1988 – 1998) at three different research facilities across the U.S. In all, there were 109 cases that were eligible to be included.

The aim of the study was to see if there was a link between maternal nutrition and TTTS laser surgery outcomes.

Researchers recorded a whole heap of things – complete blood counts, blood type, rhesus factor, gestational age, and even down to the levels of protein and magnesium in the mothers’ bodies. The women involved in the study had all been referred for laser surgery for TTTS. They found that these women showed signs of anemia and low protein, as well as signs that they were lacking in certain nutrients.

Once the surgery was completed, the women were first placed on intravenous fluids, and once they began urinating at normal volumes, they were released home on a diet that consisted of high-protein (around 100 grams a day), increased calories (400-500 on top of a normal pregnancy diet), extra iron, and other nutritional supplements.

What happened? Well, the results showed that the general health of the women improved overall. Their nutritional imbalances seemed to stabilize, and the increased focus on nutrition and fluids helped greatly in keeping moms and babies healthy.

It showed this: a healthy diet combined with increased calories, high protein, extra iron, and other supplements helped women overcome the high demands of a multiple pregnancy post-laser surgery.

And Now, For Another Study

The second study on the topic of protein in MoDi twin pregnancy was published in 2008 by Dr. Giuseppe Chiossi. He had extensively reviewed Dr. DeLia’s study and set out to see if the nutritional status of the mother had any impact on whether or not they developed TTTS during their pregnancy.
The idea was to take Dr. DeLia’s findings further and see if protein was an effective way to help prevent TTTS from happening.

This study was a comparative study, meaning the researchers took two groups and compared their outcomes. The control group was made up of 51 previous MoDi pregnancies between 1997 and 2001. The researchers were able to get data regarding any diagnoses that occurred during these pregnancies.

The experimental group was made up of 52 women pregnant with MoDi pregnancies and the data was collected between 2001 and 2005. This group was given a particular brand of protein drink with 9 grams of protein, 3 times a day. All the pregnancies were followed in a center from referral through delivery.

In both the control and experimental groups, a TTTS diagnosis was made based on Quintero staging.

In the control group, some blood testing hadn’t been routinely performed, but there was enough data to compare to the experimental group.

These two groups did not vary much when it came to age, weight gain, or for how long they carried.

This study had some truly remarkable results.

In the control group, 20 cases of TTTS were recorded out of the original 51.

In the experimental protein drink group, only 8 cases developed TTTS.

They also reported that nutritional supplementation counterbalanced the issues that are normally found in TTTS moms.

Fantastic results! This is awesome! This shows that protein stops TTTS!

What are the concerns?

First of all, there are some concerns about the data quality from the control group. Remember, that data was collected between 1997 and 2001, and was based on the Quintero staging system.

Why is that concerning? Well, because Quintero staging for TTTS was introduced in 1999, or two years after some of the data was recorded. This means that anything before 1999 was diagnosed after-the-fact, or based on the information that was available. There may have ultimately been some issues with this data and its correct retrospective staging.

The second issue is that we don’t know anything about the nutritional status of the women in the control group. That group was all based on historical records, so we don’t know if they were suffering from the same deficiencies as the experimental group.

A third issue is this – since 2005, we know that there have been some major changes in the way TTTS is diagnosed and categorized. Of course, in 2006 we first met TAPS in its spontaneous form, and then in 2007, we saw staging introduced for sFGR. We now know that TAPS, TTTS, and sFGR are different and that they require different management. But back when this paper was published, they were still all lumped together (and unfortunately, still are in some places). So, did the protein given to the experimental group really drive down the rate of TTTS? Or did it drive down the rates of multiple disorders (TTTS, TAPS, and sFGR) that were only ever recognized as TTTS given the historical nature of the study? And if that’s possible, then which MoDi disorder(s) is protein better/best at preventing?

But There are Positives… Right?

Absolutely. The data from these two studies show one thing – increased protein and attention to maternal nutrition DOES help the mothers and babies. This is supported by other papers and is also built into recommendations by the American College of Obstetricians and Gynecologists (ACOG).

Does it show that protein prevents or cures TTTS? No.

More study is needed, and, unfortunately, no further research on this topic has been done for over 12 years. It’s a shame, because there does seem to be some positive data, but any future research needs to be refined into a more specific, and much more-defined, clinical trial. The different types of feto-fetal transfusion– Conventional TTTS (TOPS), TAPS and sFGR – also need to be taken into consideration, as they do require different management. .

We’re not against protein here. It’s recommended to increase your protein when you’re pregnant with multiples and also to supplement with extra calories, iron, and folic acid. These are proven to help you with the demands of a multiple pregnancy and help your babies grow.

We just believe that the claim that protein can prevent or cure TTTS needs more research and bigger, better studies that address the individual impacts of protein on TTTS, TAPS, and sFGR. Hopefully, someone will pick the ball up on this soon and run with it!

We use cookies to ensure that we give you the best experience on our website. If you continue to use this site we will assume that you are happy with it.OkNoPrivacy policy