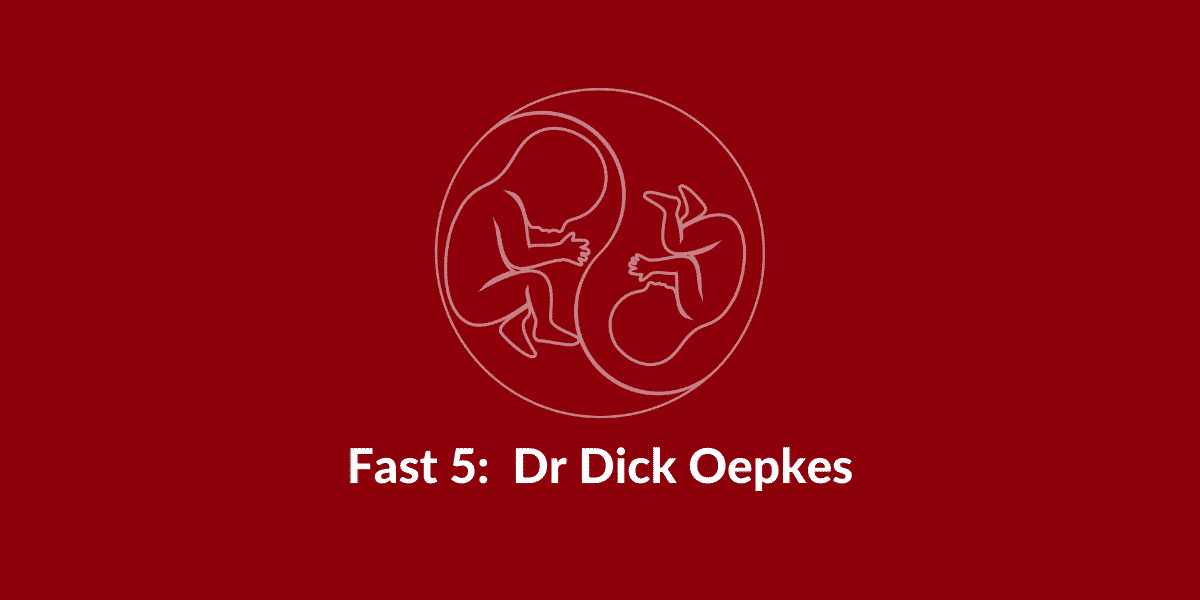 Welcome to a new series of blog posts by TAPS Support. Our team is passionately following research, but we felt it was time to dive deeper into the stories of the people behind Twin Anaemia Polycythemia Sequence. It’s time to introduce the TAPS Support Fast Five, and this week we’re introducing Prof. Dr Dick Oepkes

This week sees us talking with Prof. Dr Dick Oepkes, from the Leiden University Medical Centre, located in Leiden, the Netherlands.

Fun fact: Dr Oepkes came up with both the acronyms for TAPS (Twin Anemia Polycythemia Sequence) and the SOLOMON technique (Selective Or complete Laser Occlusion in MONochorionic twins). The biblical twist is also relevant – King Solomon went to divide a baby to give to 2 mothers, where the Solomon Technique divides the placenta to give the mother 2 babies.) We now even have a verb from this, to solomonize!

We can’t wait for you to read this interview from Dr Oepkes, who leads an amazing team at the LUMC.

Dr Oepkes, we’re so happy that you could join us today. Can you tell us a little about yourself?

I am a maternal-fetal medicine specialist from The Netherlands, working in the Leiden University Medical Center since 1988. In the early 1990s, I specialized in ultrasound and Doppler in pregnancy. I did my PhD thesis in Red Cell Alloimmunization (Rhesus disease).

Between 1999 to 2001 I was a fellow in Fetal Medicine in Toronto, Canada, where we organized an international multicenter study on the prediction of fetal anemia using MCA Dopplers.

Back in Leiden I became head of the Fetal Medicine Unit and later Professor in Fetal Therapy.

Leiden is the national referral center for all invasive fetal therapy in The Netherlands.

We now have 20 years’ experience with laser surgery for TTTS. From the beginning of this program, we have had a passion for monochorionic twins, their problems and their placentas.

My neonatal colleague Prof. Enrico Lopriore and our researchers have performed color dye injections of well over 1000 MC placentas.

Around 15 years ago, together with the groups from Paris and Leuven, we began to notice a distinct variant of TTTS, which we named TAPS. We started a research program looking into all aspects of this ‘new’ disease, led by Dr Femke Slaghekke.

Why are you so passionate about researching TAPS?

First, I am still amazed that one or only a few of such tiny anastomoses can cause such a severe disease!

Our core business is to treat (or even better, prevent) fetal diseases. For this, we need to be able to diagnose them on time before irreversible damage has occurred.

Our research has given us a good insight into the cause of TAPS, the incidence, at what gestational age range it may occur (14-36 weeks!). However, we need to do more in prevention, timely diagnosis and better treatment.

We know we can make progress by helping to educate our colleagues worldwide (on MCA Doppler and on performing the Solomon technique) and by studying the various treatment options.

I am very happy that we have now started the international multicenter TAPS Trial, led by Lisanne Tollenaar, which will answer the question of whether we should use laser surgery to treat TAPS.

What’s the most important piece of information about TAPS you can share?

Most centers (though not all, strangely enough) performing laser for TTTS now accept that TAPS can be a complication following an incomplete laser procedure and now continue to watch their patients using MCA Dopplers.

However, we see more and more spontaneous TAPS cases.

This disease is underestimated, especially since we recently have shown that a significant proportion of surviving children have some health issues later in life, such as deafness. We feel it is essential to make obstetricians caring for monochorionic twins to be more aware, and more mindful of spontaneous TAPS.

Make sure your doctor has the knowledge and experience to manage TAPS, and if in doubt ask for a referral to a more specialized center.

Contact other doctors or post questions on the TAPS Support Facebook Group if you have questions you feel your own doctor has not answered or cannot answer completely.

If you have TAPS stage 2 or higher, ask your doctor about the TAPS Trial.

There is sufficient evidence that every monochorionic twin deserves to be screened by ultrasound including MCA Doppler at least every two weeks, with the aim to timely detect TTTS or TAPS.

Both are severe diseases which effective treatments are available, and can end in death or severe handicap in the case of delay in detection, referral or treatment.

We’re extremely grateful that you took the time out of your busy schedule to answer our Fast Five, Dr Oepkes, and all of us have learned a lot from your interview.
Stay tuned for the next instalment of the TAPS Support Fast Five, where next week we’ll talk to another researcher about TAPS, research and everything in between.