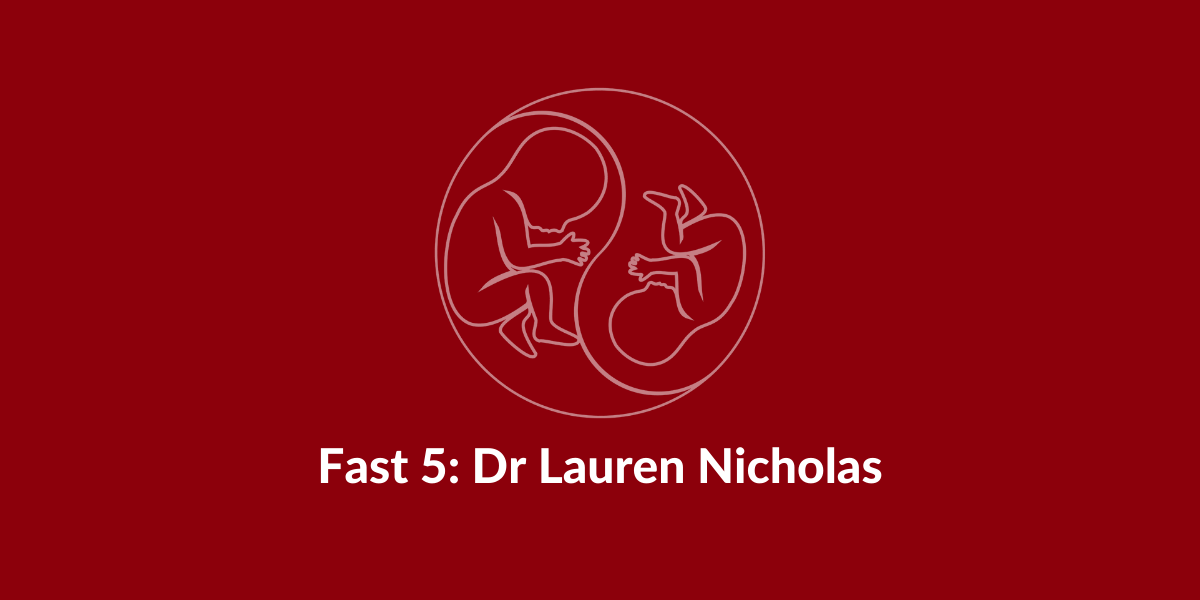 Welcome to a new series of blog posts by TAPS Support.  Our team is passionately following research, but we felt it was time to dive deeper into the stories of the people behind Twin Anaemia Polycythemia Sequence.  It’s time to introduce the TAPS Support Fast Five, and we’re introducing Dr Lauren Nicholas.

Dr Lauren Nicholas, of D’Youville College in New York State is next in our series.  Dr Nicholas is an Associate Professor of Sociology and a mother of TTTS twins.  She is the author of 2 papers on TAPS (1 & 2), both related to screening.  We’re also fortunate to have her as a member of the TAPS Support Team!

Dr Nicholas, tell us a little about yourself.

Hi there! Well, I am a professor and researcher living outside Buffalo, New York where I was born and raised. The weather is terrible, but the food is great! I’m also a wife and mom to five young children, including one set of MoDi twins, and a lot of farm animals. We recently decided to leave a life of suburbia to “switch it up” in the country and “show the kids a different way of life,” which includes demanding daily outdoor chores and a lot of responsibility. Not knowing much of anything about this way of life (I call myself an imposter farmer), its been a learning curve …and I YouTube a lot of things …but, so far so good!

Professionally and academically, my discipline is social epidemiology. I am particularly interested in the adoption and diffusion of scientific advancements and clinical guidelines –as they pertain to monochorionic twin pregnancy –and how patients are affected when this adoption fails to occur.

I was not always passionate about researching TAPS, in particular. Since graduate school, my focus has always been related to standards of prenatal care in monochorionic twin pregnancy. The TAPS crisis “found” me. That is, while conducting related research within the population, I became aware of the blatant disregard of TAPS, and routine TAPS screening, on behalf of ACOG, SMFM, and many U.S.-based maternal-fetal medicine specialists. This immediately peaked my concern and inspired new research efforts.

What makes me most passionate is that, in the U.S., this is an institutional-level problem.

This is ACOG and SMFM letting their clinical guidelines regarding TAPS (which are NOT EVEN supported by the very scientific paper cited to support them) sit for over FIVE YEARS with no revision or reaffirmation. Five years regarding advancements in TAPS etiology, screening, and treatment is a lifetime.

This is ACOG and SMFM placing a disclaimer at the end of said outdated (and never supported) TAPS clinical guidelines, telling physicians that the information presented is only as accurate as the time in which the guidelines were written, and to exercise clinical judgment.

And this is ACOG and SMFM knowing full-well that, regardless of the disclaimer, those clinical guidelines are stuck to, like glue, in day-to-day practice, by far too many.

So, as depressing as it is to think that the very organizations tasked with promoting the best outcomes for monochorionic twins are sitting on their hands as death and permanent disability occur all around and women are deprived their reproductive rights –it is oddly inspiring to imagine a moment in which they make it right, and the current evidence is adopted and diffused. Mothers and their babies will benefit greatly from institutional-level action.

Because I focus on the patient experience side of TAPS, I think the most important thing to know is that you can and should receive routine prenatal TAPS screening, regardless of what your provider may try to tell you. They are not permitted to develop your prenatal care plan based on expired and unsupported clinical guidelines and are obligated to instead refer to current science, which will unanimously support your right to access this screening. There is no need to accept “no, we don’t do that” as an answer.

For patients who have been diagnosed prenatally, I would advise them to remain optimistic. There are very effective treatments for TAPS available and a handful of experienced providers (in the U.S.) ready to employ them. What becomes crucial is understanding the diagnosis –where you fall regarding stage and gestational age –and getting to a provider who has the knowledge and ability to effectively treat TAPS. The social media groups comprised of current and former TAPS patients are a great place to turn for advice on locating a competent provider, as well as for social-emotional support.

Regarding postnatal TAPS, I am an advocate for every mother requesting haemoglobin and reticulocyte counts for both twins at birth and sending her placenta to pathology, regardless of whether or not she was receiving routine MCA-PSV Dopplers while pregnant.

Screening for TAPS is a medical and ethical obligation. The results of TAPS screening may alter the outcome of pregnancy, and every woman and her family have the right to determine which TAPS interventions (or lack thereof) they wish to use. TAPS screening is ultimately an issue of reproductive, foetal, and women’s rights. You simply cannot withhold non-invasive testing that has the potential to produce findings that can alter the life course of multiple people. The testing provides information so that choices can be made and those choices belong to the patient.

Dr Nicholas, we’re grateful for everything you do for us at TAPS Support. Thank you for taking the time to answer our fast 5 questions.  Our next instalment is not too far away, so stay tuned.