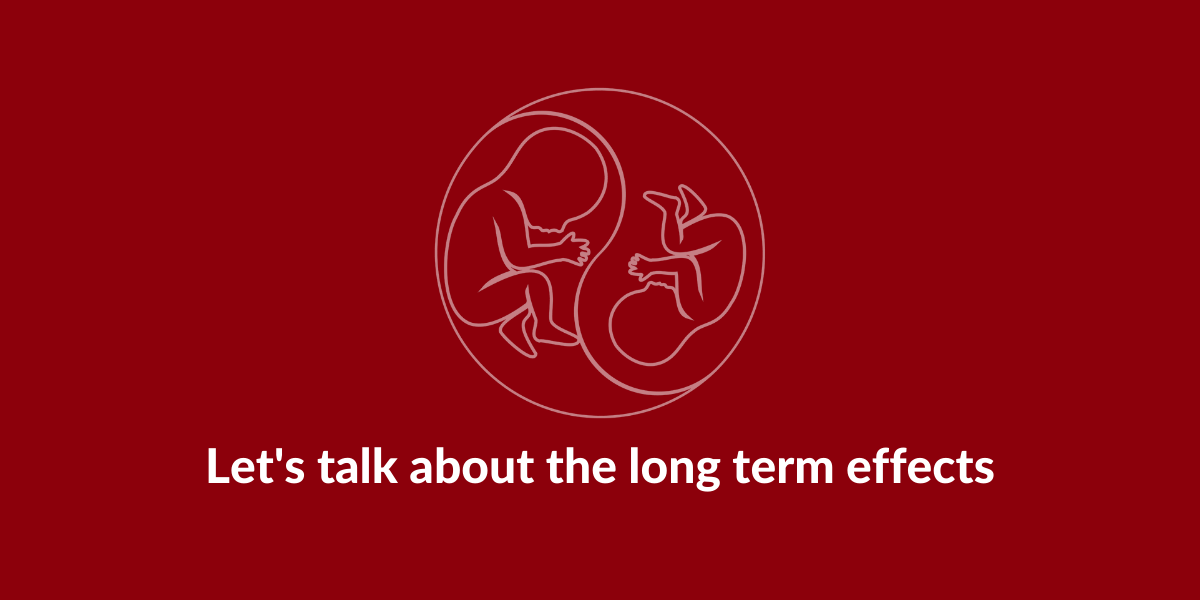 If we had to talk about the most frequently asked questions we get about TAPS, this would have to be one of the most common.

What Are The Long Term Effects of TAPS?

What do we know about the long-term effects of Post-laser TAPS?

We know that there are a lot of similarities between the long-term effects of post-laser TAPS, and TTTS.

Here’s a list of the outcomes in post-laser TTTS, from a paper published in 2014. The control group was 47 survivors, aged between 2 and 5 years old (average age 2 years, 4 months).

We also know that the babies who received transfusions in utero to treat their TAPS had the lowest cognitive scores and that low gestational age at birth and low birth weight were important risk factors for the cognitive delays.

Spontaneous TAPS is a little more common, in that it happens in around 3-5% of pregnancies.

What do we know about the long-term effects of Spontaneous TAPS?

For a long time, they were thought to be much the same as post-laser TAPS. In a paper that’s about to be published though, this has been shown to be incorrect.

Spontaneous TAPS has much more serious, much more devastating consequences than post-laser TAPS.

We know this control group is much larger and has intensive follow-ups. In fact, what we also know is that this group is the largest known group of TAPS survivors in the world. They are followed intensively, and this group is almost double that of the post-laser group used in 2014.

The control group of 74 survivors was assessed at an average age of 4 years old (but ages ranged from 2 years to 7+ years).

Here’s the facts on the information so far from this study:

We know that some people are dismissing the spontaneous outcomes because the control group is too small and that these are normal premature related issues (with particular reference to the delays and deafness).

Firstly, the control group for spontaneous TAPS is the largest known in the world. A lack of diagnosis and recognition for TAPS has limited the number of cases that are able to be followed up. What we’d also like to ask is why the smaller, post-laser group follow-up number is deemed acceptable, where the larger, heavily investigated spontaneous group outcomes are being dismissed?

Secondly, whilst delays and hearing issues are related to prematurity, they are documented at much higher rates in TAPS twins, and at alarming rates in donor twins only. If the data was only prematurity related, wouldn’t we see an even diagnosis across the board, rather than a higher incidence in donors?

We spoke with an audiologist who confirmed that there is a possible link between ANSD and prematurity (however, the information here is also limited as research into ANSD is new, and a rather uncommon diagnosis), and they confirmed what we’ve stated here – that if bilateral deafness was only a prematurity related issue, it would occur equally in donors and recipients, and not only in donors.

What we don’t know.

One of the biggest things about TAPS is we have to remember is this disease is literally just 15 years old when it comes to naming and recognition. The long-term effects are just only becoming known, and so it’s important that we remember that this data, while it will help us advocate and get appropriate care for our babies, can, and probably will change.

As TAPS becomes more and more recognized, and more long-term studies are completed, we will see changes to these outcomes – this is certain. For now, this data is a start, and it is more information than we have ever had.

We do have the hurdle that these control groups are small, and for definite answers, we do need larger groups to study and test. This is one of the reasons that websites like TAPS Registry existed – to pool data and increase the range of the studies. We also think this is a great time to point out that you are the voice for your children – advocate for prenatal and post-natal TAPS testing, and childhood follow-ups.

What we do know.

We do know that whilst the group is small, these outcomes are shocking. Spontaneous TAPS is devastating, and clearly, diagnosis and intervention are crucial to lowering the risks.

What we also know is that this information now helps parents to get intervention for the babies born with spontaneous TAPS. We now have some data to help us get early intervention and assistance that we critically need.

What we also have is a reason to advocate hard for MCA dopplers and TAPS Awareness. The outcomes have been crucial to our fight for getting MCA dopplers made a standard part of testing for monochorionic twins. If we know the outcomes, we can push for testing and diagnosis, and more importantly, treatment to avoid them.

How you can advocate.

• Get routine MCA-PSV Dopplers while pregnant
• Hemoglobin and reticulocytes for both babies must be done at birth (even if you were having routine MCA-PSV Dopplers while pregnant)
• Your placenta must be sent to pathology to be evaluated for TAPS anastomoses – dye injection is vital!
• Get proper ante and postnatal TAPS treatment(s), when possible
• Make sure your pediatrician and other health care providers are on-board for routine long-term follow-up to screen for the complications outlined above
• Be proactive about childhood intervention(s)
• Always ask questions.

Don’t accept the outdated excuses, and fight the myths about TAPS. Don’t let anyone dismiss your concerns or your right to a basic standard of care.

If you have a diagnosis and want to talk to others in the same boat, or you want to ask more questions, you can join our Facebook group, or just contact us. We’re here for you.