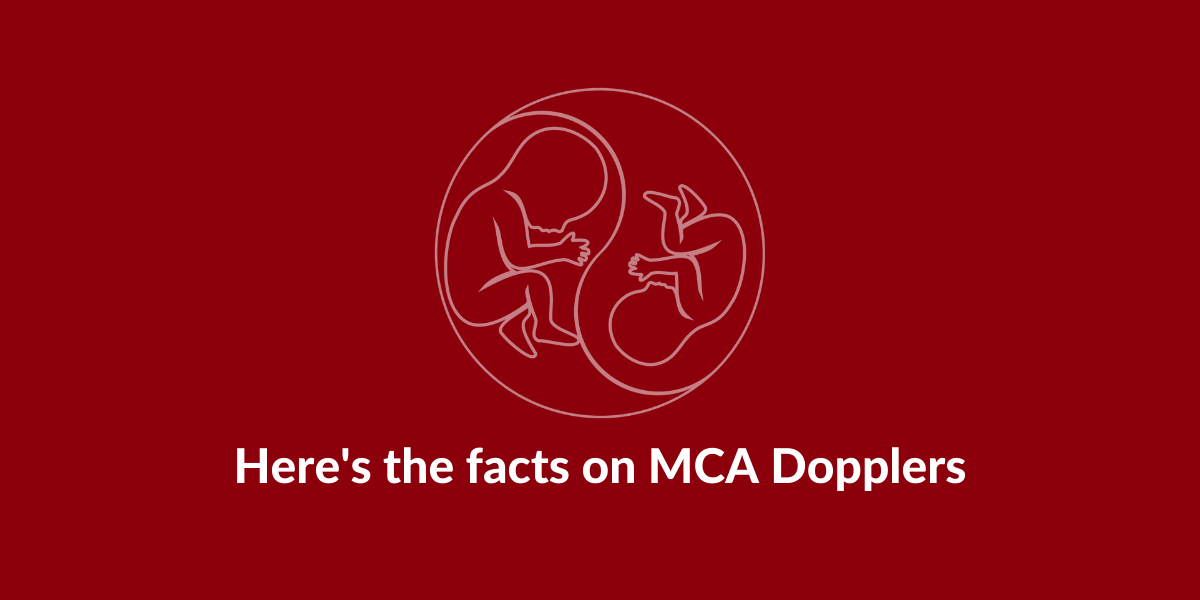 You’ve seen that we post a lot about the importance of MCA Dopplers.  In fact, we’re kind of obsessive, a little annoying, and sometimes downright blunt when it comes to them. (You can read a little more about how TAPS is diagnosed here.)

This installment of our blog explores a couple of really important topics regarding MCA Dopplers:

What we hope you come away with is an understanding of the importance of MCA Dopplers, and how you can confidently advocate for them.

What are MCA Dopplers?

MCA stands for “middle cerebral artery” and PSV stands for “peak systolic velocity.” MCA Dopplers are effectively an ultrasound that detects the speed blood is going through the babies’ brains. It’s non-invasive and requires some skill to get the reading at the correct angle.

The resulting measurement is in centimeters per second, which is then converted to an MoM (multiples of the median, or average for your babies’ gestational age). You can do your own MoM calculations here – http://www.perinatology.com/calculators/MCA.htm

Why do we need them?

MCA-PSV Dopplers are crucial to diagnosing TAPS before birth.  They’re the only reliable way to diagnose TAPS that we know of, so far.  You need to have them done every 2 weeks from 16 weeks and tracked up to delivery.

Are they the only way to detect TAPS?

There are other indications that TAPS is happening. In some cases, a starry sky liver has been seen in recipients on ultrasound, in others, an echogenic placenta on donors. (Two of our founders both had starry sky livers recorded in their cases.)

But these “other findings” are inconsistent, and new research is emerging that some TAPS cases show no other signs other than discordant MCA Dopplers.

As it stands, they are the only reliable way to detect TAPS in utero.

Remember, TAPS on its own does not usually present with fluid differences like TTTS.  It is a silent, deadly disease.

How can I advocate for them?

If you’ve come against a wall with your doctor who says TAPS is a mild disease, this can be very frustrating. We know that there are huge risks associated with TAPS, like neurodevelopmental impairment, deafness, and death, and a lot of doctors aren’t up to date.

We suggest taking this paper to your next appointment to help you advocate.

We love our doctors and our care providers, but sometimes we need to stand up and advocate for our babies.  TAPS is a very real threat to monochorionic pregnancies. A risk of 1 in 16 for a disease that can permanently disable or kill is not to be dismissed.