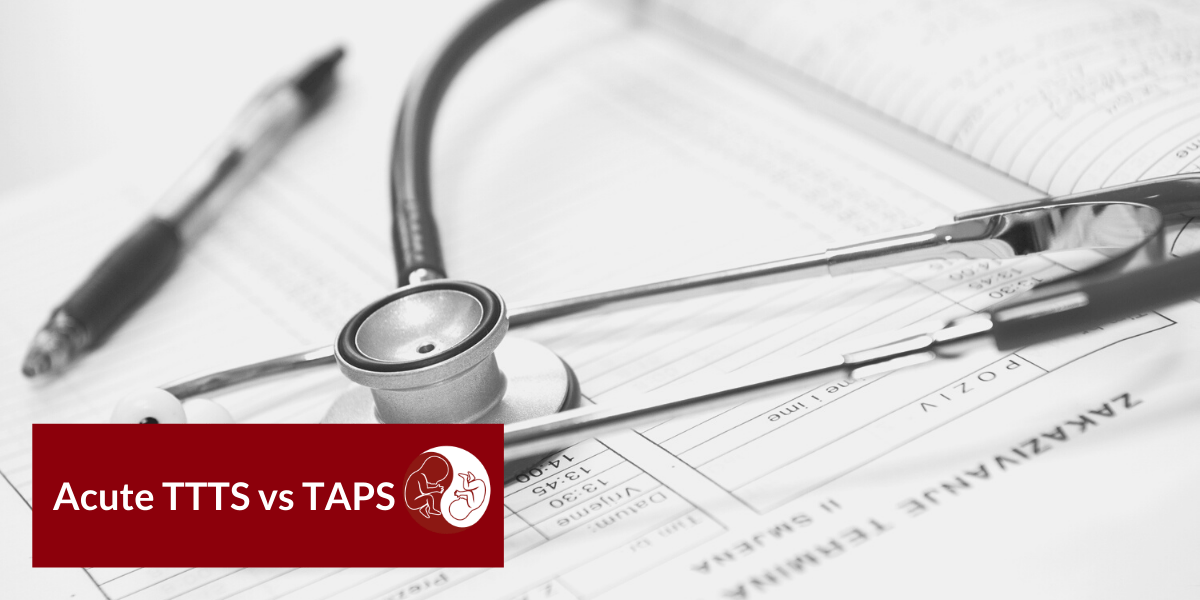 My babies were born red and white – is that TAPS or TTTS?

We’re going to talk about a couple of different diseases here, and it’s essential to give a quick overview of the types of diseases and point out the main difference between Acute TTTS vs TAPS.

TTTS has a few different forms – the “typical” version where there is a fluid imbalance caused by blood transfusion through large surface connections. It happens most commonly between 16 and 24 weeks but can happen anytime during the pregnancy. It is a transfer of blood, so there can be a hemoglobin difference.

TAPS is a long, slow transfer of blood between babies.  It is caused by tiny connections less than 1 milliliter thick. It’s more like a slow leak of red blood cells from one baby to the other and is diagnosed when there is a hemoglobin difference between the babies of more than 8g/dL and a difference in reticulocytes of more than 1:1.7. This is a significant difference -the reticulocytes (young red blood cells). TAPS can happen at any time during a pregnancy. There is also a significant color difference on the maternal side of the placenta.

This paper is excellent if you want to go in-depth into the differences in blood counts.

My babies were born red and white, OMG it’s TAPS!

First of all, not always.  If you’ve been having regular MCA dopplers during your pregnancy, and they’ve been close together and not deviating, it’s easily explained.

Probably the most important thing to remember here is that if it’s a significant color difference, the easiest way to establish if it was Acute TTTS vs TAPS is to get the proper blood testing done.  Ask that the hemoglobin and reticulocytes be checked and counted for both babies, and your placenta is tested for small connections less than 1 millimeter thick.

So what’s the difference between acute TTTS vs TAPS?

Acute peripartum TTTS happens just before or during birth. It’s a sudden shift of blood from one baby to the other, and it can also cause a red and a white baby.  However, acute TTTS happens quickly and causes some different problems than TAPS.

TAPS is a long, slow transfer of blood from one baby to the other. Only 5-15 milliliters of blood moves from the donor to the recipient daily, and the most reliable way to detect it is via MCA dopplers. There isn’t any such thing as rapid onset TAPS or Acute TAPS. It happens slowly over a long period of time.

When there is a red baby and a white baby at birth, blood testing is essential.

Acute TTTS and TAPS both have a significant difference in hemoglobin (> 8g/dL). However, the reticulocyte counts in acute TTTS twins are very similar between donor and recipient.  With TAPS, the reticulocyte count is much higher in the TAPS donor due to chronic anemia. (Acute anemia happens with rapid blood loss, and chronic anemia happens with slow blood loss. )

(note to medical teams.  it’s essential to look at the reticulocyte promille for absolute accuracy)

Placental color dye injection is also an important diagnostic tool to distinguish between the two conditions. There are large connections in acute TTTS, with at least one AA (artery to artery, which allows the rapid blood shift.) In TAPS, there are only tiny connections.

So, in summary, – Acute Peripartum TTTS is quick (hours) and happens just before or during birth, and TAPS happens slowly over a more extended period (weeks).

What are the long term effects of Acute TTTS vs TAPS?

It’s difficult to say with Acute TTTS, just because it hasn’t been studied. We do know that it is rare, but that it still can happen. We also know that a lot of TAPS cases were misdiagnosed as Acute TTTS in the past, so unfortunately there’s not enough data.

However, the long-term effects of spontaneous TAPS are serious.  There is a high risk of neurodevelopmental impairment for both babies, with donors the most severely affected.  Donor twins are also at the risk of a form of deafness called Auditory Neuropathy Spectrum Disorder.

Why is it important to know the difference between acute TTTS vs TAPS?

In some cases, the donor twin will be in acute hypovolemic shock because they lost so much blood to the recipient. The donor will be very pale and limp. The rapid blood loss also puts the donors in danger of a lack of oxygen. This is because they don’t have enough blood to carry it around their body, especially the brain.

Donors usually have hemodynamic problems (low blood pressure) and breathing problems. Quick treatment with fluids (to compensate for the blood loss) and blood transfusions (to balance the anemia) is needed.

In TAPS donors, acute fluid therapy and fast, massive blood transfusions are dangerous because TAPS donors are not hypovolemic; giving them too much blood too quickly could cause them to go into heart failure. TAPS donors also won’t be in acute hypovolemic shock.

The wrong treatment can be dangerous and even deadly.

So what can we do?

Make sure you’re getting the right tests done before pregnancy. We’ve created this easy-to-remember memory trick with “Is your MFM your BBFF.”

When there is a significant color difference between your babies at birth, insist that hemoglobin and reticulocytes are checked for both babies. Your placenta needs to be dye injected so those small connections can be found (or ruled out).

TAPS and TTTS are very real and very different diseases with different long-term outcomes. It’s time to kill the myths around acute TTTS and TAPS and instead start asking the right questions. That’s why it’s so important to get the right testing before and after birth.

Want more information, or ask questions? Join our thriving Facebook community and be part of the conversation. It’s important to know the differences between Acute TTTS vs TAPS, and be educated on them.

This article would not be possible without the assistance of Dr. Lisanne Tollenaar, who provided the images and quality control. Thank you.

We provide information like this as part of our commitment to breaking down the myths and misconceptions about TAPS. Discover more about our foundation here.